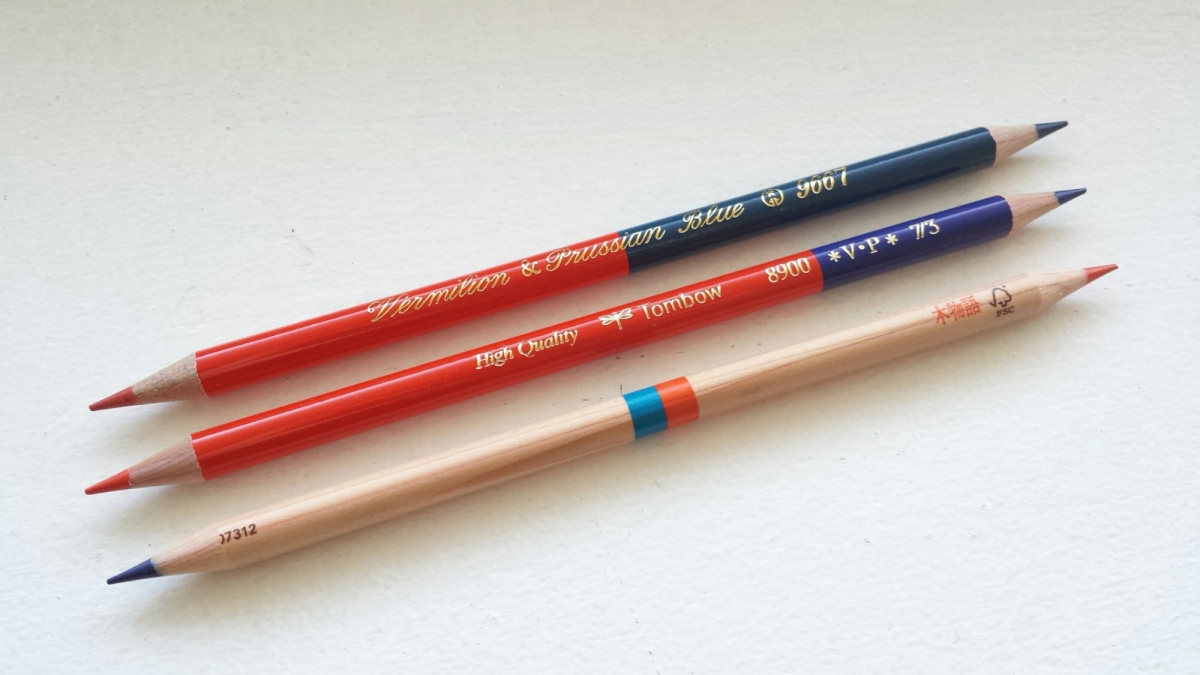 My first red-and-blue pencil was the Mitsubishi 2637/2667. Now, after trying many other brands, I realize that the Mitsubishis were actually on the softer side of the spectrum; on the other end are the vintage American colored pencils (such as the Eberhard Faber Colorbrite and Eagle Verithin), which are specifically formulated for writing and therefore have harder and stronger cores.

Tombow bicolor pencils (second and third from top in the picture above) seem to offer a good compromise between these two extremes. I assume that the regular Tombow 8900 V/P and the Ki-Monogatari natural-finish bicolor pencils share the same cores, since I could not detect any meaningful differences; both are very good. The Ki-Monogatari has painted bands at the ends, which make you hesitate with the sharpener – another instance of the ephemeral luxury so often associated with pencils. 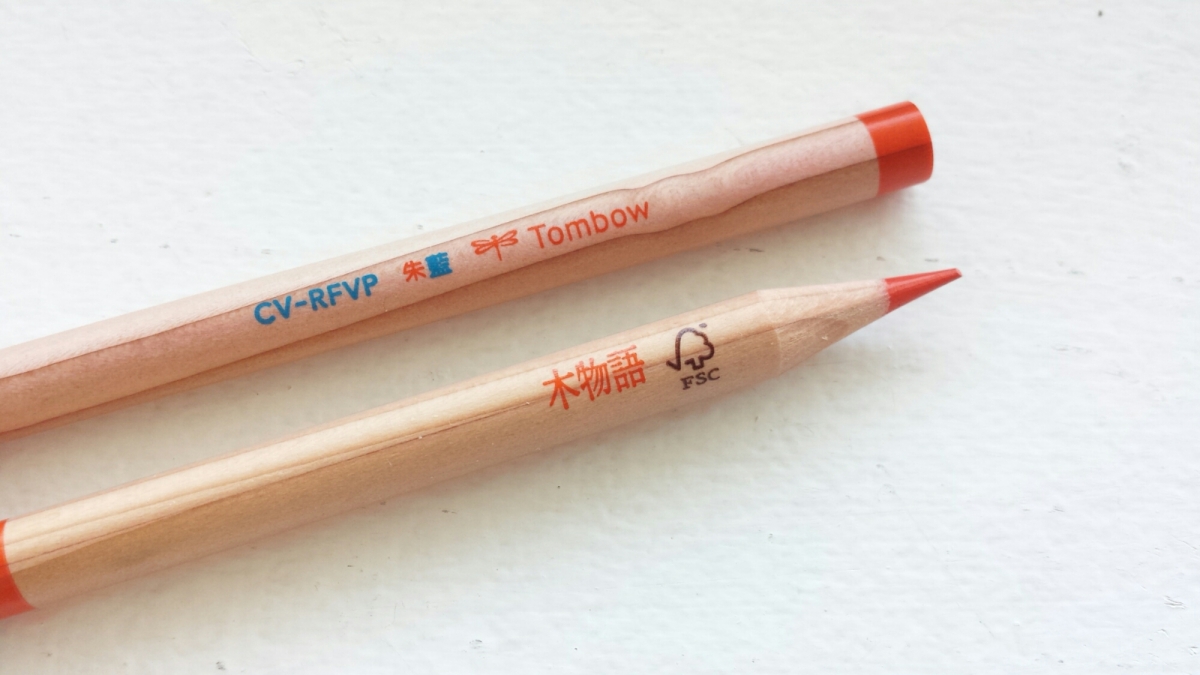 The Kitaboshi vermilion-and-Prussian-blue pencil (the top pencil in the first picture) was one of those lesser-known and seldom seen (at least outside of Japan) pencils that I would have loved to have “discovered” for myself, but it was disappointing. It is harder and fainter than the Tombows.

The 9608 bicolor pencil from A. W. Faber, and its modern successor from Faber-Castell, are both wonderful. I especially love the older, chubbier 9608; its “red” core has a bright fuchia tone to it that doesn’t show up well in pictures but sets it apart from the other red-and-blues (the blue is less inspiring). 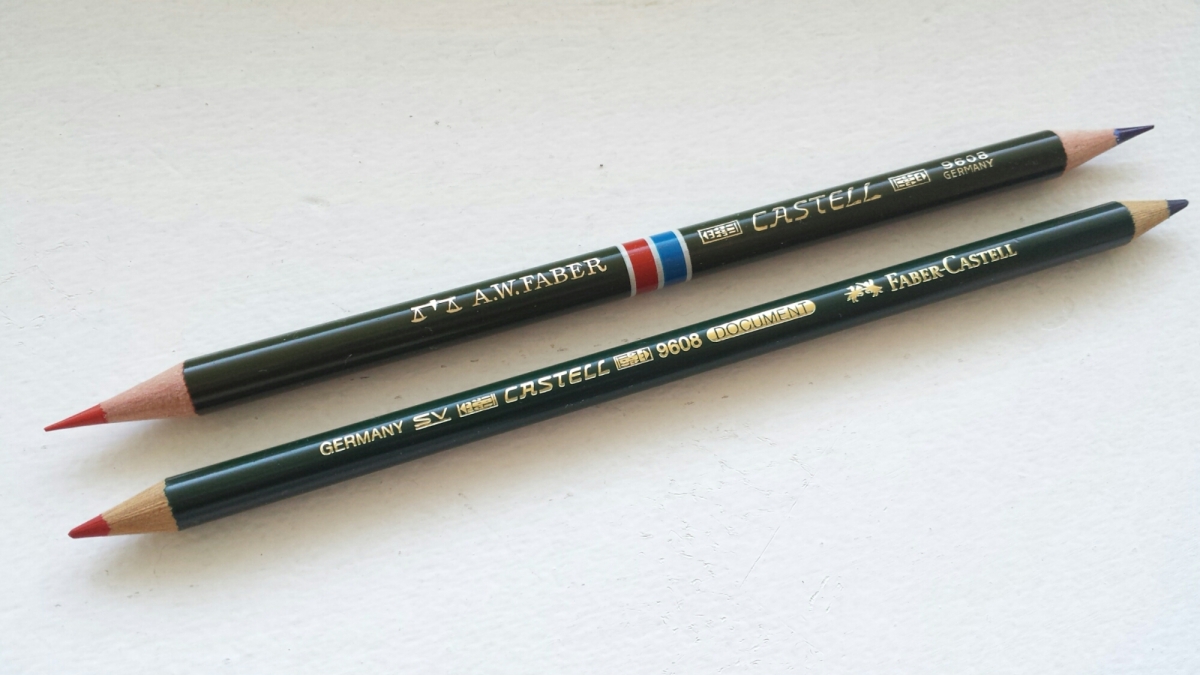 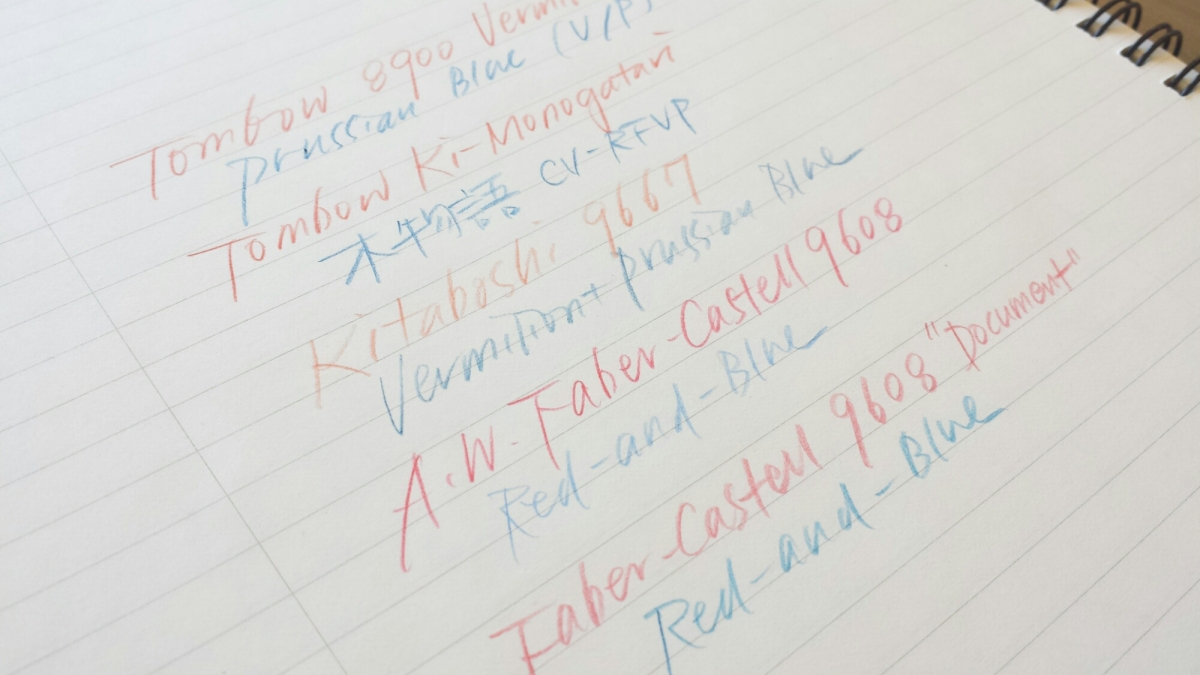 I was able to try the handsome modern 9608 thanks to Gunther :) May its production be assured for decades to come! 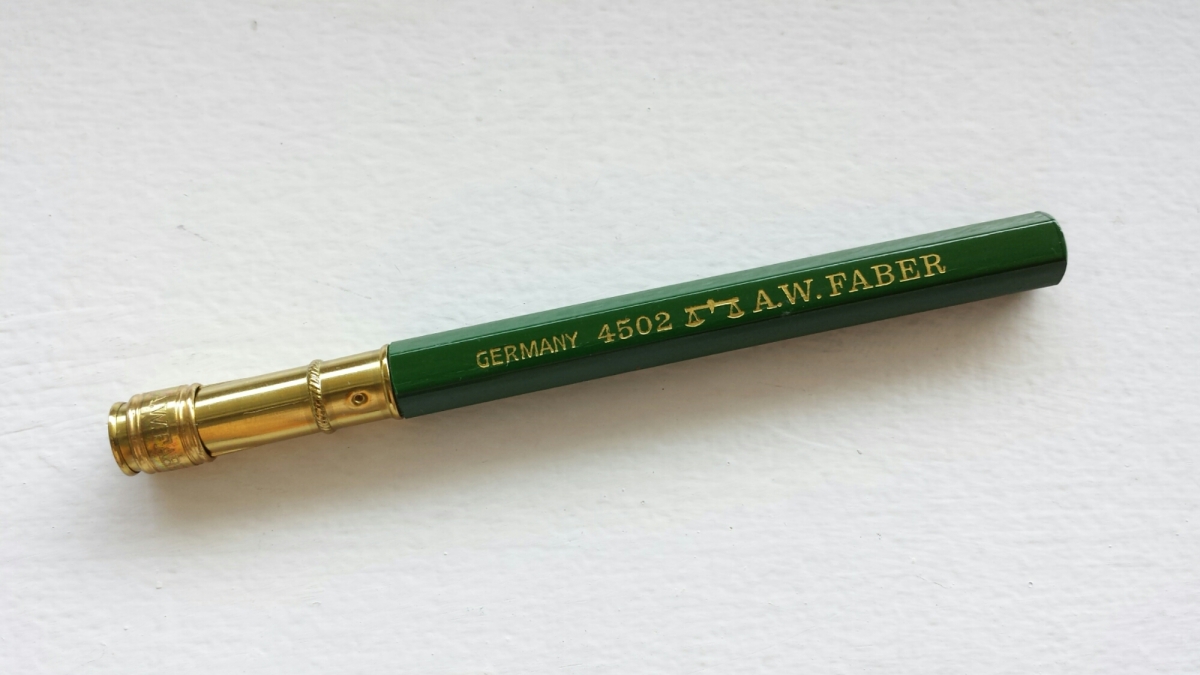 I don’t produce pencil stubs often enough to justify the purchase of pencil lengtheners, but I like them all the same. This is a plastic model in the same olive-green color as my Castell 9007s. There are nicer ones made of wood (that I don’t have), painted in other colors, including a vivid red that looks like it was done by Caran d’Ache. I’ll have to work on my Castells in order to get to this guy. 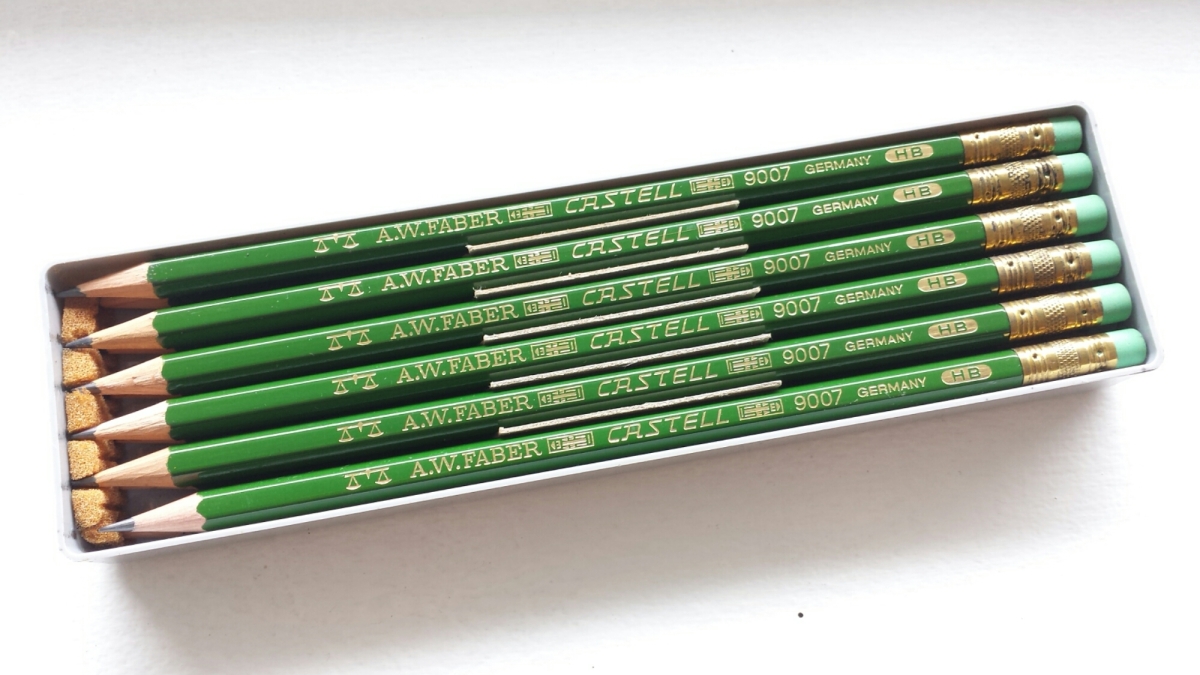 The Castell 9000 is not my favorite pencil, but I find myself attracted to variations of it.  The Castell 9007 is simply the eraser-topped version of the classic 9000; nowadays it is assigned the same number (as is the Jumbo), but in the past it seems to have existed as a separate model.

The specimens I have are old enough to sport the olive green (as opposed to the modern forest green) coat, but not old enough to incorporate the more attractive hexagonally fitted ferrule that adorns the Staedtler Mars Lumograph 2390. 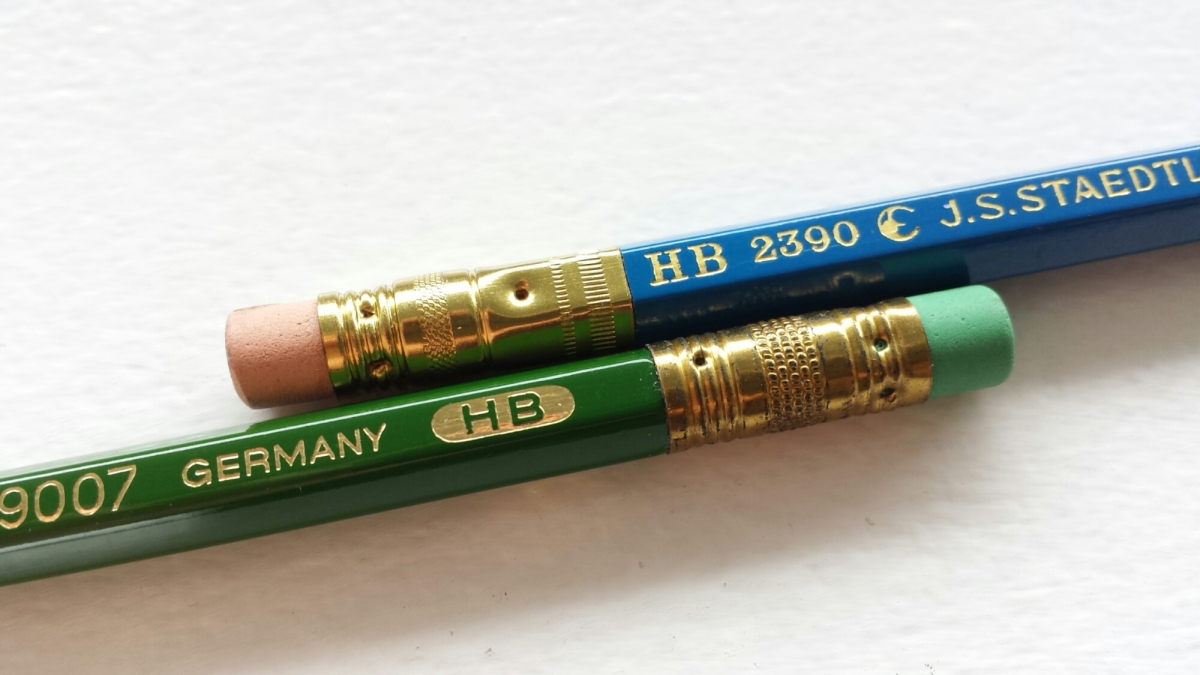 And I find it hard to date A. W. Faber pencils!  Here is a small sampling of Castell 9000s (with the 9007 thrown in) with different printings.  Never a dull moment… 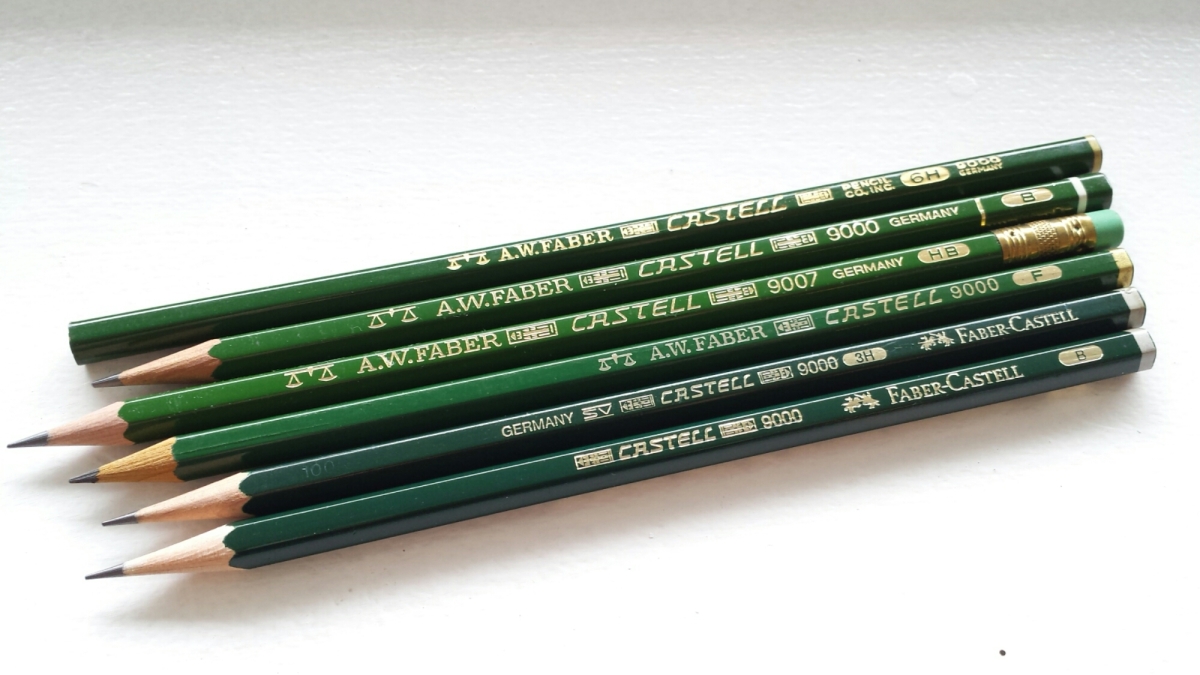 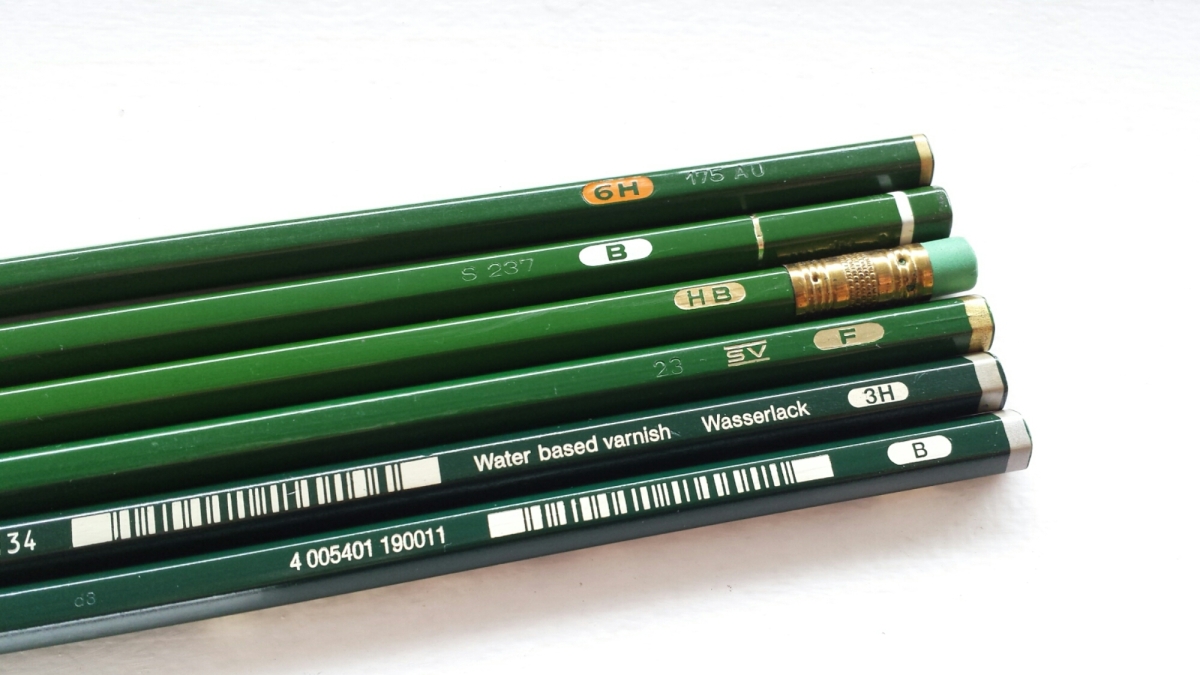 (Addendum 7/14:  I found an authoritative collection of Castell 9000s at Fred’s Pencils.  Seems like I got the order more or less right!)