I have a couple more things left to say about my trip to Japan, but I’d like to sneak in just one post about Crane’s, while the topic is still fresh. Crane and Co. is a venerable paper company (founded 1801) based in Dalton, Massachusetts. I lived in the Boston area as a student many years ago, and developed a fondness for this “local” brand of paper that was sold in the university co-op. (If I were ever to draw up a “bucket list,” it would include ordering a lifetime’s worth of personalized stationery from Crane’s.) However, Crane’s is very hard to get outside the United States, and expensive too; so the brand mostly remained a fond memory. When I visited Boston again in 2014, I found that many of the familiar stores, including stationers, had closed or changed; the co-op had also gone through a number of transformations, and no longer carried any stationery to speak of. I feared for firms like my beloved Crane’s in the digital age: unneeded and unused, well-made but not appreciated.

However, in this week’s issue of the New Yorker (the first-ever Television Issue), I came across a surprising fact: Crane and Co.’s business is actually much more than stationery. It supplies the paper for American currency, in fact, has been doing so for almost a hundred and forty years! I will never look at a hundred-dollar bill in the same way again! In fact, their expertise is such that they even make bills for dozens of other countries as well. I am so relieved. Crane’s (now renamed Crane Currency) will not be going anywhere in the forseeable future, and it will presumably remain healthy enough to carry on making superlative stationery on the side. Time to celebrate by highlighting some choice items from my hoard 😉

First, some greeting cards, that Crane’s does so well. 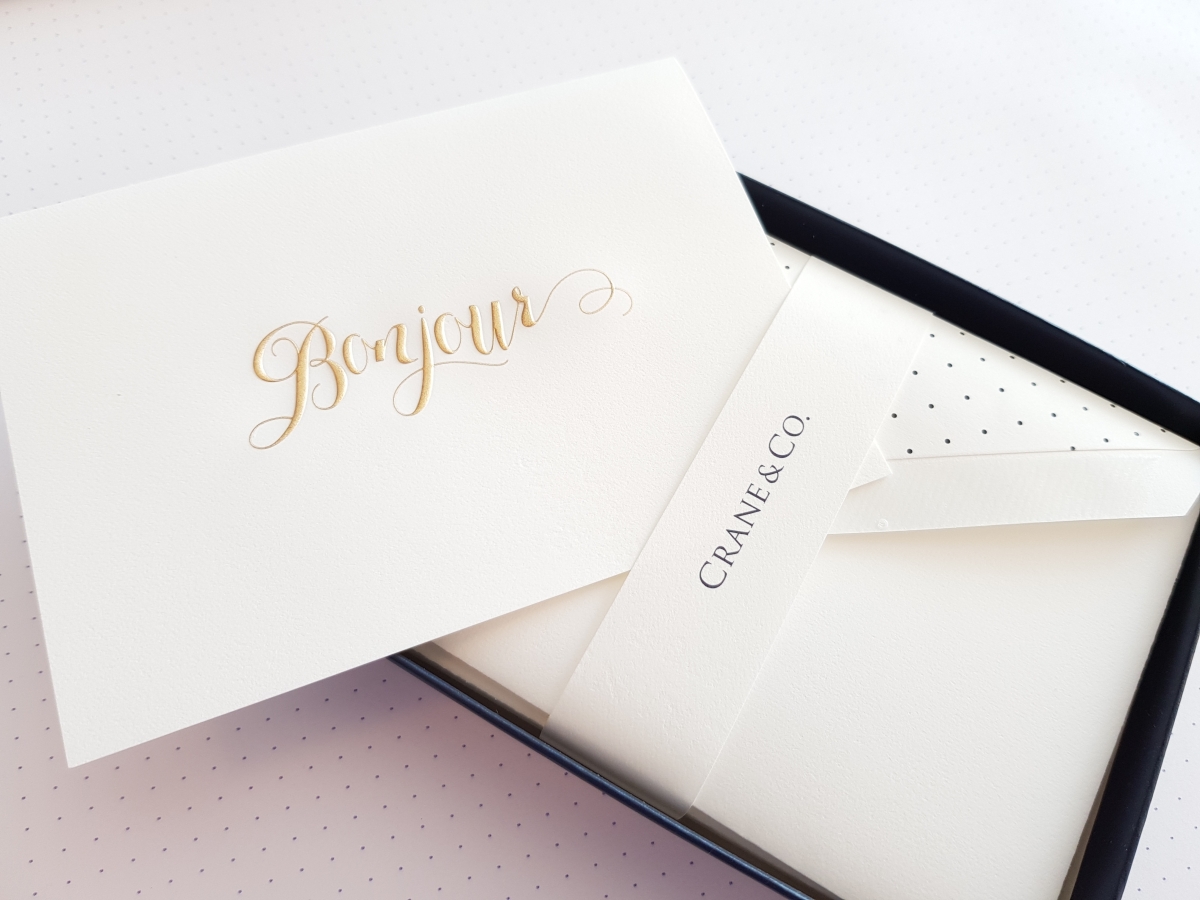 As you may have guessed, I tend to fall for the calligraphic accents. There are many companies that make greeting cards, but the level of detail you see on a Crane’s card is on an entirely different level. But this quality comes at a steep price. I often think buying greeting cards and letter paper is the ultimate form of altruism – you buy them in order to give them away. I haven’t managed to part with all of them, not yet.

Crane’s does the Florentine floral too, but in my opinion it’s not one of their strong suits. But look at the lovely watermark on the envelopes.

Here is a set of letter paper, with envelopes (one sheet per envelope). I used one pair so far and was in pen heaven all the while. Crane’s paper has a very distinct feel: while other kinds of “high-end” letter paper tend to emphasize the laid pattern and/or thickness, Crane’s remains thin and smooth, but with a tensile strength that hints at an extremely compact mass of fine fiber. It’s different from the smoothness you get from Japanese paper.

And now we approach quasi-vintage territory (20+ years). I’m partial to these Hobonichi Planner-sized envelopes, and in this too Crane’s was my first love. Ever since I moved out of the U.S., I’ve had to make do with G. Lalo.

Lastly, some airmail stationery. I didn’t know it at the time, but these were probably drawing their last breaths even as I bought them. You can’t get them anymore, can you? Or those blue aerogrammes that you could write and then fold into an envelope? The sheets have yellowed somewhat but otherwise remain in pristine condition 😀