The most recent collection of short stories by Vladimir Nabokov, incorporating thirteen new stories, was published in 2008 to great fanfare. I’m just getting around to reading it now, because it usually takes me about ten years to catch up with major literary events; plus, I can’t exactly say I was a fan of this particular writer up till now. We’ll see.

Nabokov is widely known as having been a Blackwing enthusiast, and indeed his lifespan seems to have coincided with the glory days of the pencil in general. The humble instrument makes several appearances in his fiction, including the now almost-defunct indelible pencil. The following is from the short story “Bachmann,” about an egotistical musical genius of that name:

Bachmann was sitting on her bed, barefoot and in a nightshirt, with a plaid blanket humped over his shoulders. He was drumming with two fingers on the marble top of the night table, while using his other hand to make dots on a sheet of music paper with an indelible pencil.

After a memorable night, during which Bachmann’s mistress succumbs to a fatal illness, his agent inspects the aftermath:

On the night table Sack found a crumpled sheet of music paper, but no one was able to decipher the violet dots of music scattered over it.

I wonder how many modern readers will understand why the markings are “violet”? (And here I’m thankful for my crash course in pencil history over the past few years!) For my part I am curious whether Bachmann used a violet-colored indelible pencil, or used a moistened graphite one. I’d wager the latter – you’re not supposed to suck on indelible pencils because the aniline dye is poisonous, but I wouldn’t put it past any deranged artists. 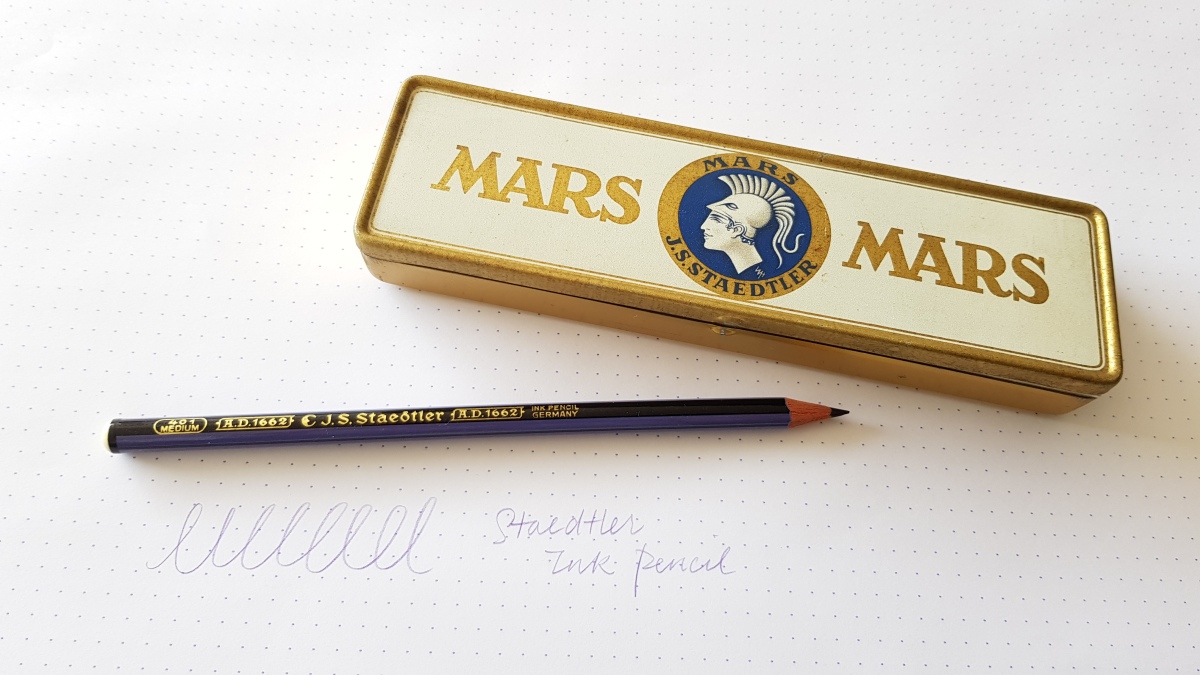 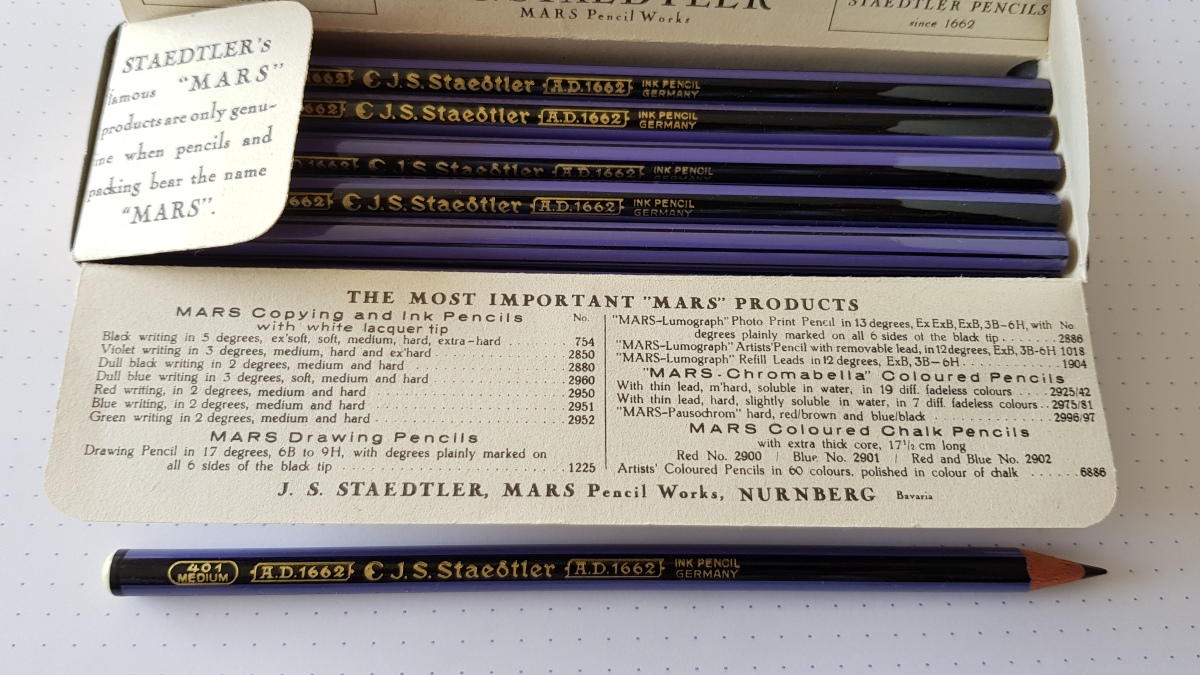 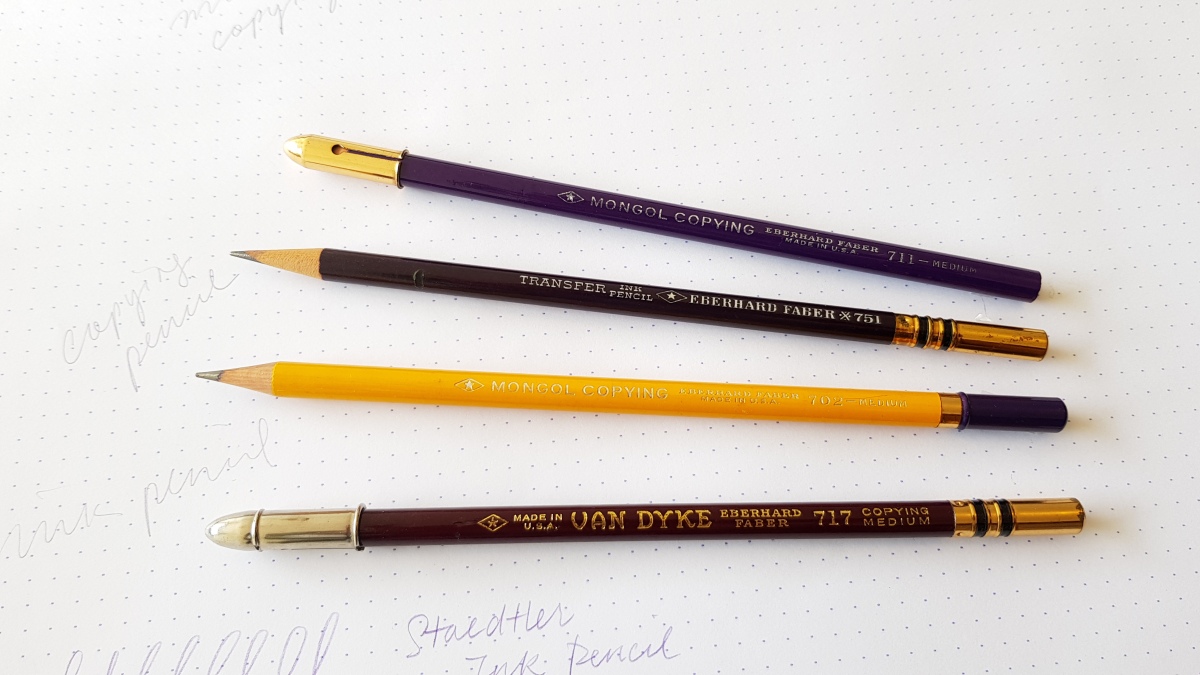 (If you are unfamiliar with indelible/copying/ink pencils, you can start here, at Pencil Talk.)

The other day I received a delightful package from France. 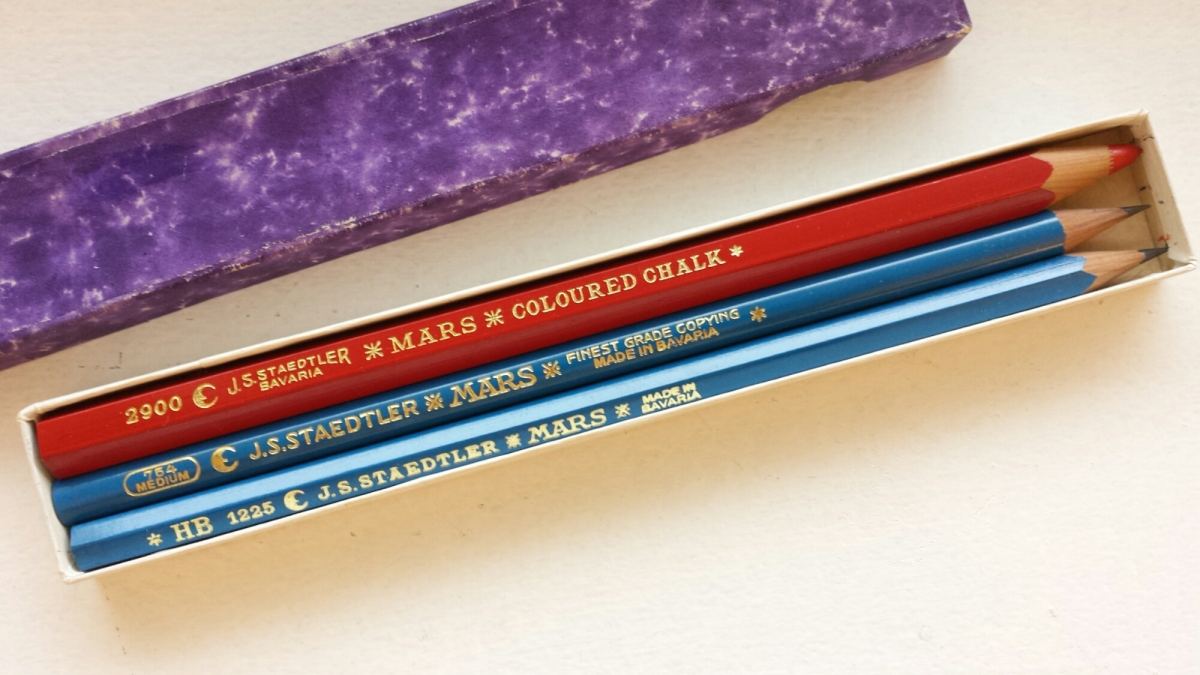 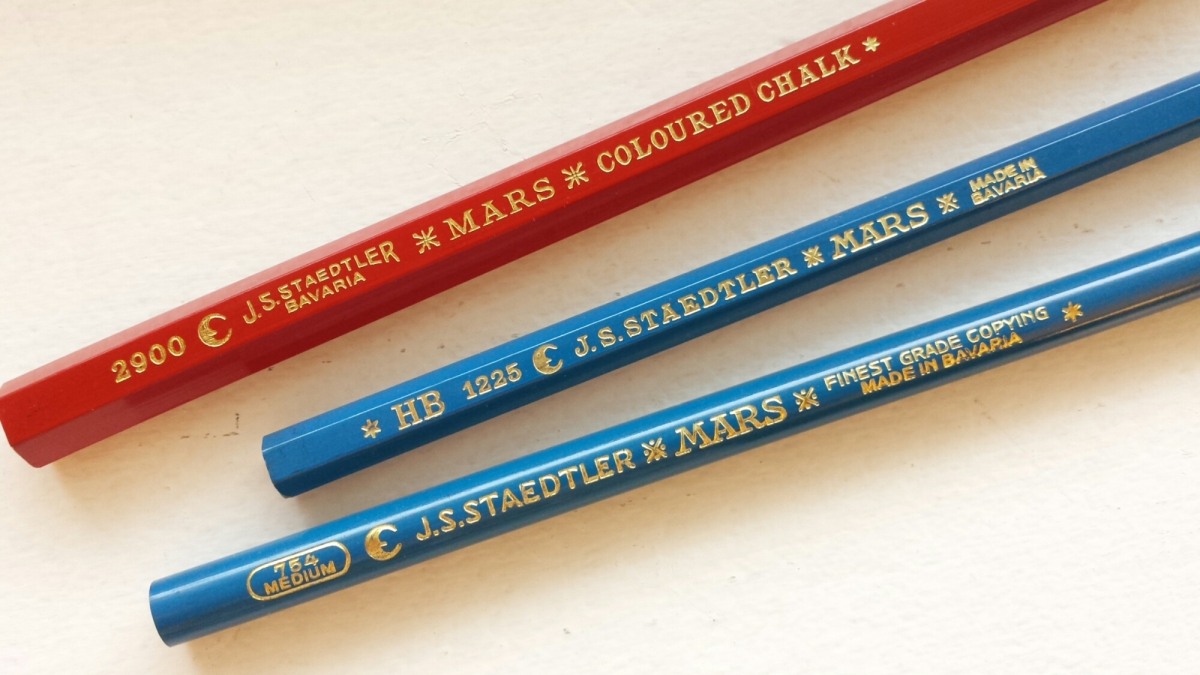 I wonder how these three particular pencils came to be packaged together. The box seems to be original to these pencils, despite the fact that it doesn’t carry the Staedtler logo, because the three pencils fit so snugly inside. Maybe it was a gift or sample package of some kind?

The crisp gold letters and the vivid paint, combined with the lead quality, show that German pencilmakers were really at the top of their game. I love the exquisite lettering, in particular what I privately think of as the “rainbow over Bavaria”: 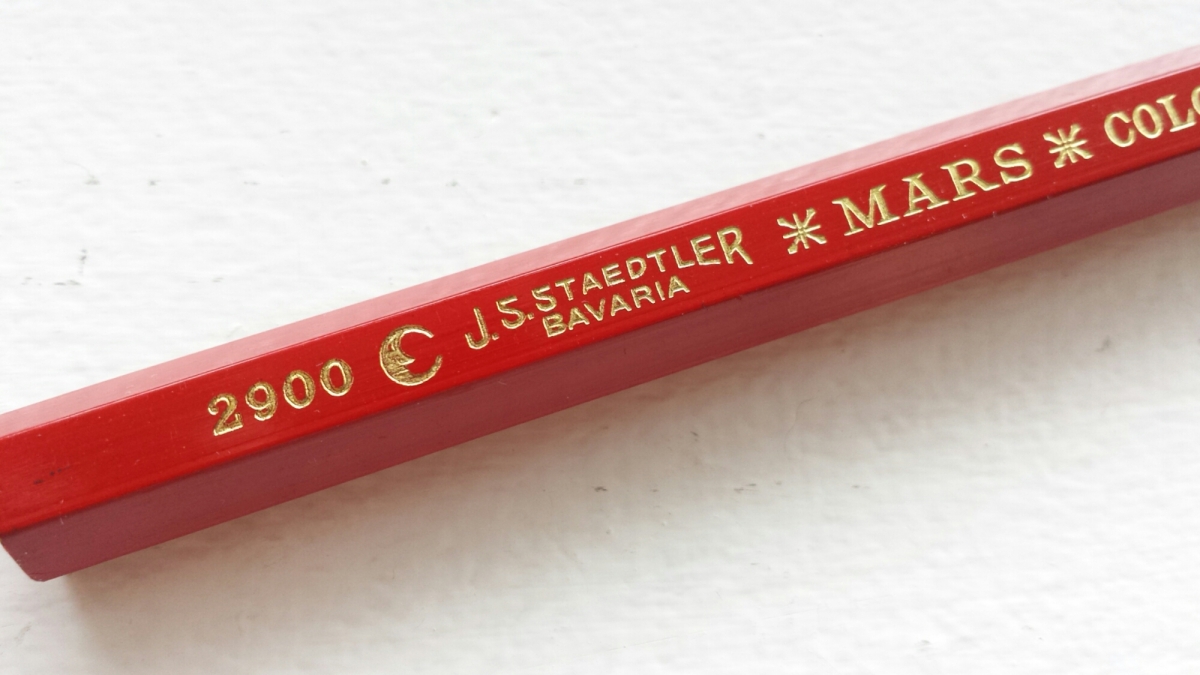 The way they are sharpened is also very interesting. The shapes are all different (and I think all are factory-sharpened): 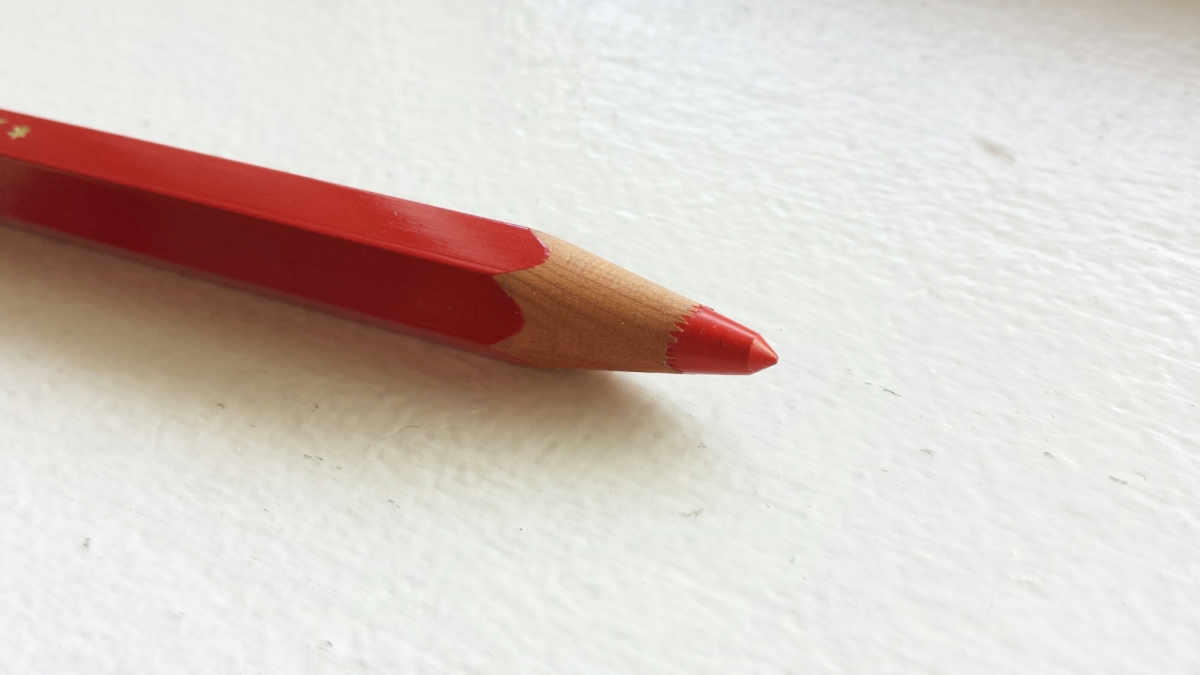 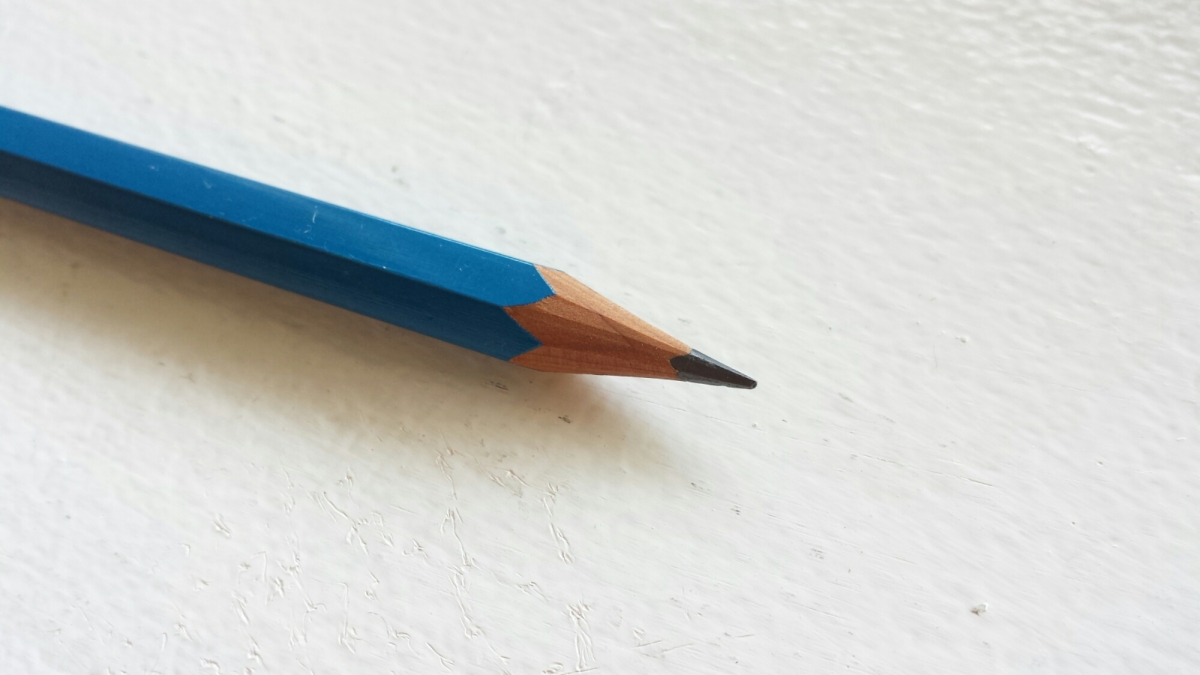 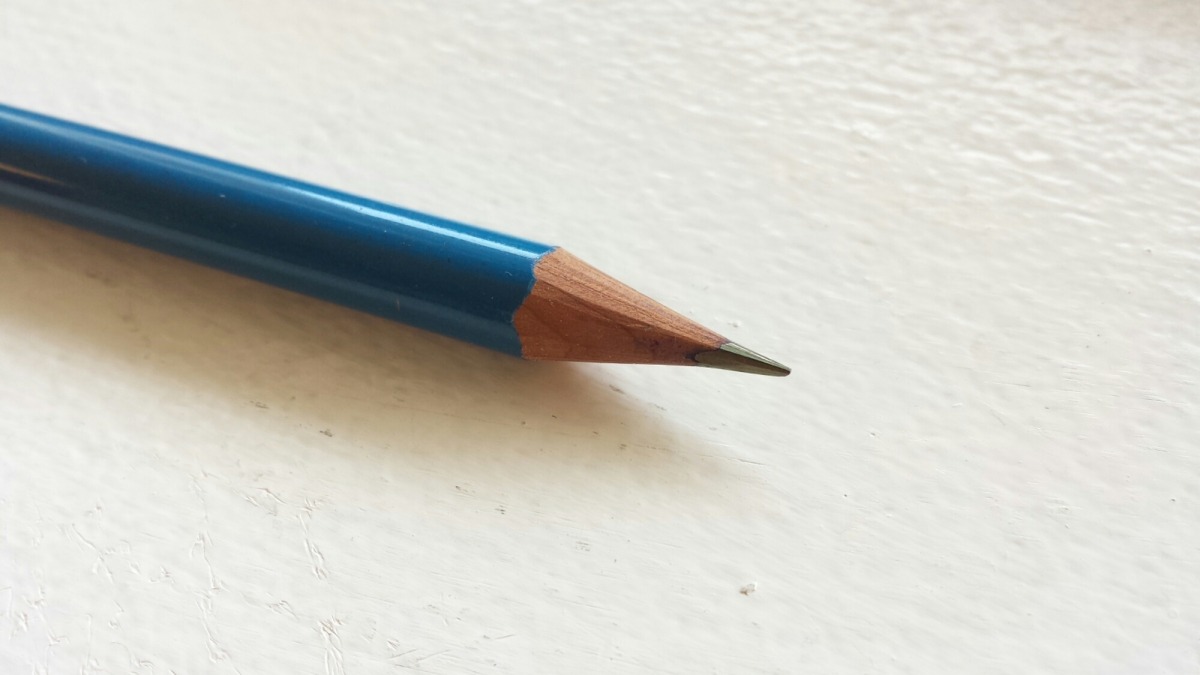 The Mars 1225 is known as the precursor to the Mars Lumograph. It was produced from 1908 to 1930, after which the Lumo took over. (I don’t know exactly when the imprint changed from “Made in Bavaria” to “Made in Germany”. )

Until very recently, I had made the mistake of judging all pencils based on my personal tastes; specifically, how a pencil performed for someone with a moderate to light grip, who wrote quick, loose cursive on lightly coated paper. But as I get to know more and more pencils, I realize that many of them (especially older ones) are made with a specific purpose in mind, and that is the standard by which they should be judged. If I haven’t been totally satisfied with the Lumograph in the past, it is because the Lumograph wasn’t made for ordinary people like me. Instead, we should ask (as with all draughting pencils worth their salt)*:

And this is where the Lumograph delivers. Talking about this pencil, I sorely feel the lack of an architectural or engineering background – the only pencils I am probably qualified to judge are the “general writing” pencils. Dear Lumo, I hardly knew you, let’s start over again! 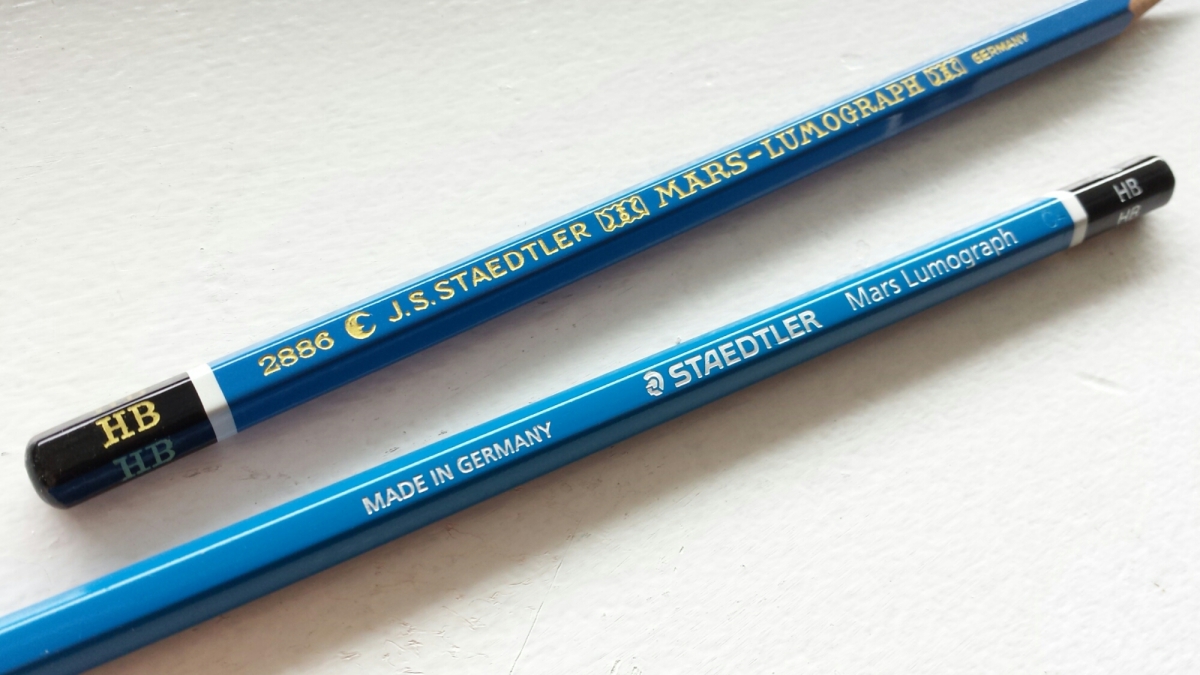 *I am indebted to the journalist Tsuchihashi-san, especially to his book on long-selling stationery items, and Gunther for the insights contained in this post. Gunther’s blog is a treasure trove of information, particularly on Staedtler history. I strongly encourage anyone interested in Mars pencils to read through his posts (and Google does a decent job of translating from German to English).