Tokyu Hands in Shinjuku is a fun place. Occupying seven floors off a corner of Takashimaya Times Square, it sells chic home supplies and lifestyle products, hard-to-find curiosities and sometimes just plain weird stuff. Because the store’s selection overall is so idiosyncratic, I had trouble thinking of it as a serious stationer up till now, since I’ve bought furniture and drapes there as well as pens and notebooks in the past. But to my surprise, it was one of five major stationery stores featured in the Staedtler podcast (of course, this list is far from objective, as it probably reflects Staedtler Japan’s preferences circa 2014-2015 and especially its aim at that time of promoting its new Premium line of fountain pens, but I do think that the list has a point). This particular branch is located in one of Tokyo’s prime commercial districts, with a trendy clientele that is neither too young nor too old, and is therefore an outstanding example of the well-rounded and well-stocked general stationer. (Ito-ya, incidentally, has moved away from this department-store-style stock-everything model.) It also issues Hands-only limited editions in partnership with stationery brands from time to time; actually, this kind of thing seems obligatory for any stationer worth its salt, in this town.

I got my first Lihit Lab product there: a bag from the “Smart Fit” line that can fit in a couple of notebooks and some pens, plus maybe a diary or small notepad. The material is Cordura, and this really makes a difference – it looks and feels so much nicer. The strap is sold separately.

Some special pencils and erasers from Hands: the Japan-only Staedtler White HB (a kind of mark sheet pencil – “Mars, the god of war, will lead you to victory!”), a special-edition Hinodewashi Matomaru-kun eraser that will help you pass your exams, and a Seed Radar 2017 limited edition. It’s my first proper Seed eraser (though I probably used it already, in other OEM-ed incarnations). The Thermo-pencils were chosen by my son. 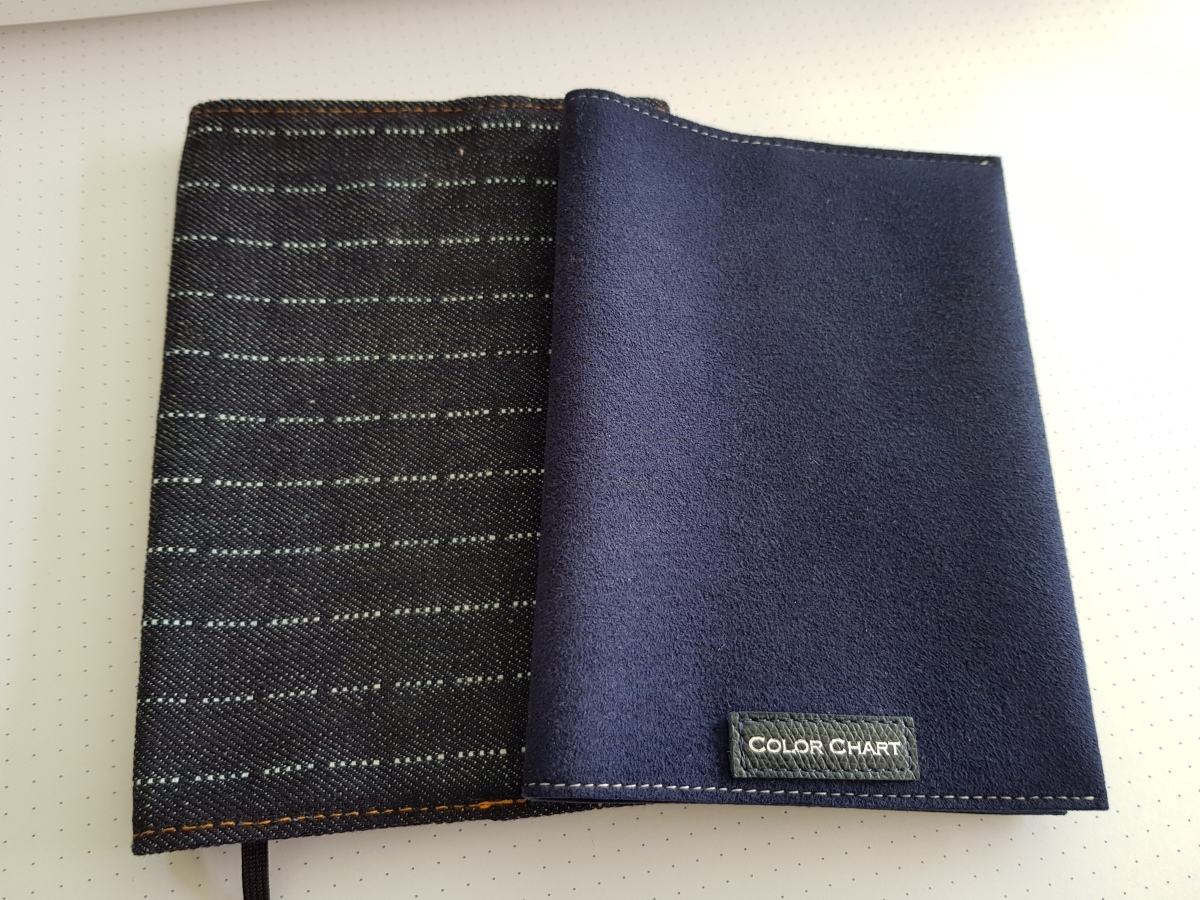 The denim book cover on the left is another trophy from Hands. The one on the right is from Ito-ya and will be discussed in the next post.

And last but not least, some seasonal postcards from Kyukyodo. I love the way Japanese stationers still stock letter-writing paper and postcards; a lot of it is seasonal, and the designs and colors are a joy to behold.

I’m going to wrap up my Tokyo report with a final post on Ito-ya sometime soon. I didn’t realize it had been almost a month since I last posted! Hopefully the next one isn’t going to take as long.

Greetings, everyone! I have been away all July and have just come back to Montevideo. The summer was hot, humid, and inspiring; we visited family, we visited lots of hospitals and got all fixed up, and we made a long-overdue nostalgic trip to Tokyo. But before recounting my stationery adventures I must start with what I came across on the long long flight home.

This incredible shot is from the Australian film Red Dog: True Blue (2016). A twelve-year-old boy is sent to live with his grandfather, near Pilbara (scorched red earth, bush and seemingly not much else), after his father dies and his mother is committed to an institution, where he befriends a very special dog. I know, it’s the usual heartwarming doggie story, and nothing about it suggested it would reach sublime heights moments later with a shot of a vintage Staedtler tin and a Möbius+Ruppert pencil sharpener.

This assortment of stationery is what Mick needs in order to do his “correspondence sets” via radio instead of attending a normal school. I think the movie is set in the late 60’s, judging from various clues such as women’s dress, one character’s involvement in Vietnam and the fact that the “Summer of Love” in San Francisco is supposed to have “just happened.” In that case we may conclude that the pencil case is a hand-me-down from his grandpa, since that particular Mars head was used until the 50’s; the sharpener is more of a stretch because Gunther (@Lexikaliker) informs me that this particular model, the 602, was introduced around 1970.

But never mind the dates – it’s simply a beautiful shot. Kudos to the good work from Down Under! 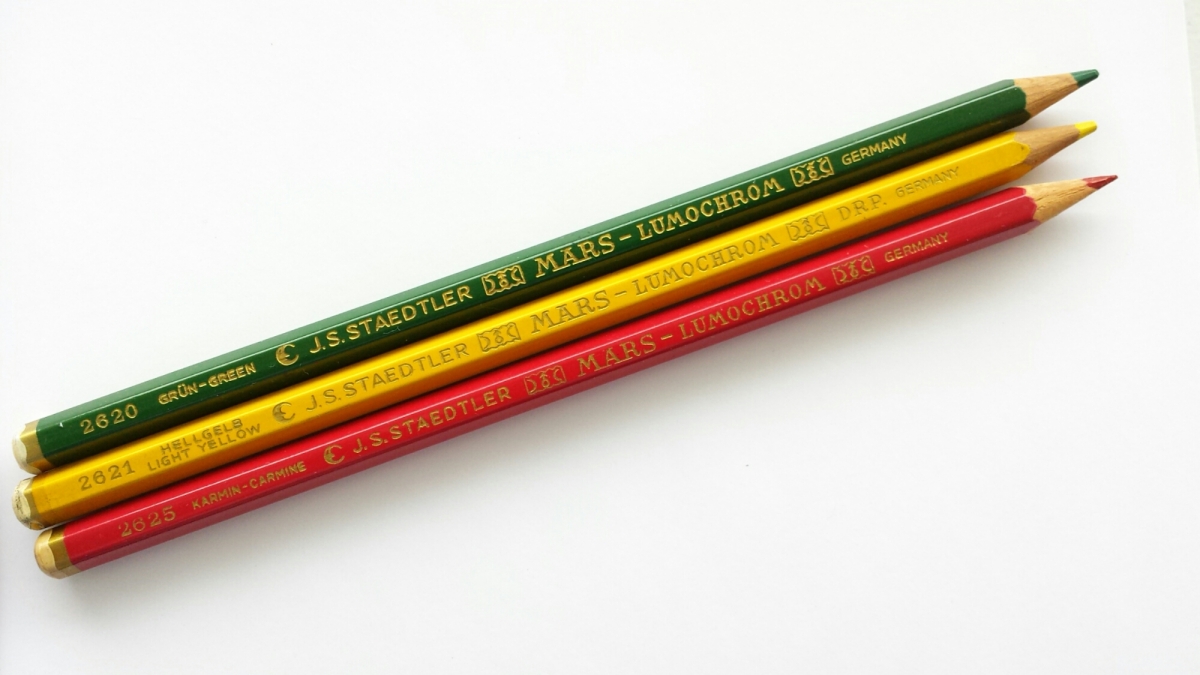 Inspired in turn by the Mars Lumochroms at Lexikaliker, here’s my (unintentionally Italian-style) offering.  The amazing thing about these pencils is that they didn’t come from eBay or Etsy or anywhere like that – I found them in a store, the same one where I got my Chung Hwa pencils.  They were there the whole time.  The yellow one says “DRP. Germany” while the others have just “Germany” written on them; I wonder if one is older than the other?

Trying them out (I sharpened the red; the green and yellow remain factory-sharpened), I do see that they are harder and more solid than other colored pencils.  They write very sharply and keep their edge very well. 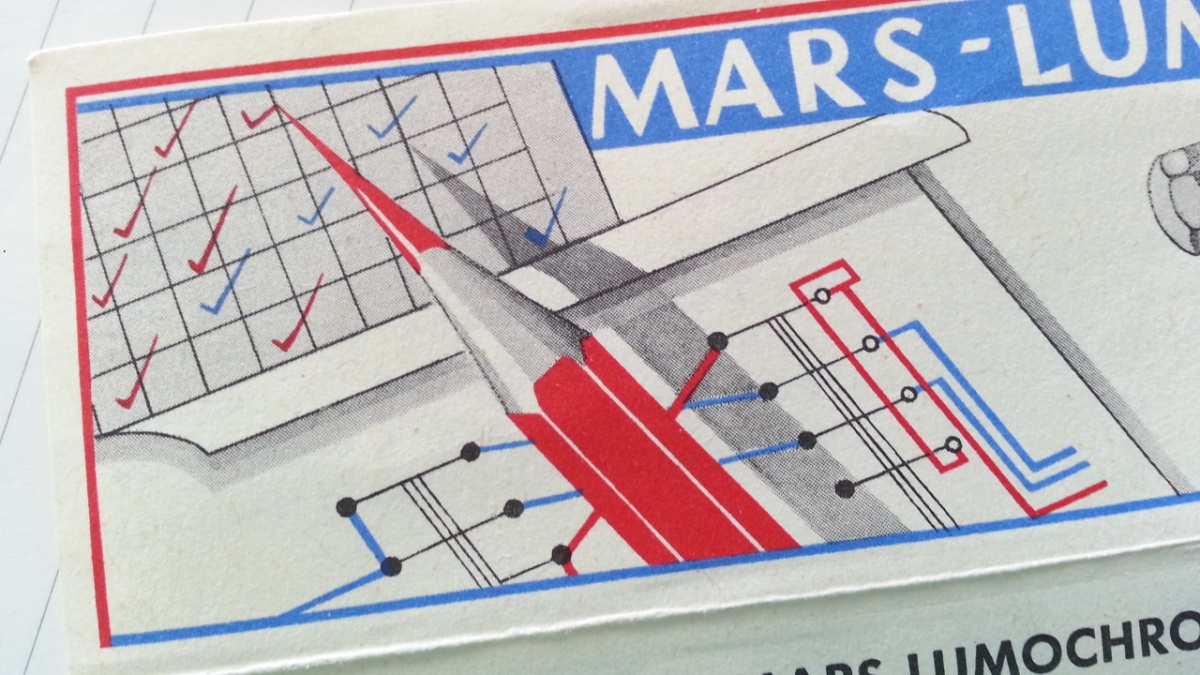 If you’ve ever bought vintage Staedtler Mars tin-cased pencils on eBay, this Lumochrom insert will be familiar.  I wonder what sharpener was capable of producing such a long, needle-sharp point?  The shape certainly reminds one of the Janus 4046/4048. (A slightly different sharpened shape can be seen in this vintage poster at Lexikaliker.)

By the way here’s what’s on  the reverse… 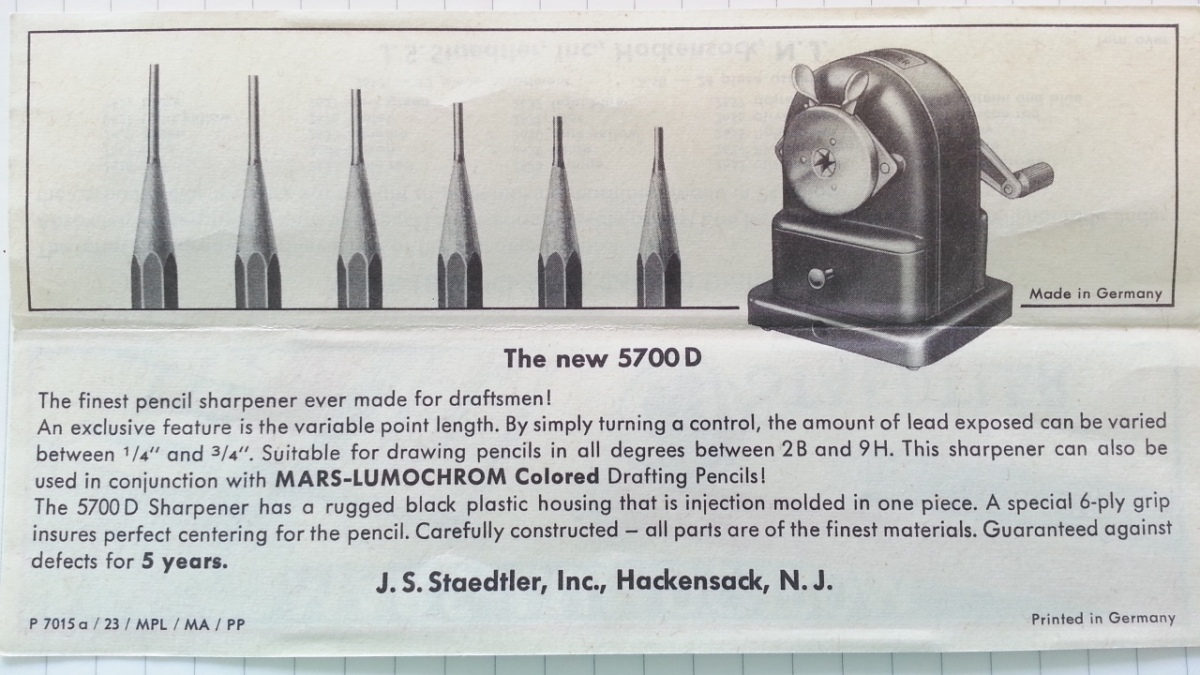 I picked up this Staedtler Triplus Jumbo beginner’s pencil at the neighborhood stationer’s today while out on a walk. Yellow is a classic color for pencils, but this bright, shiny canary yellow seems particularly perfect for a child’s first day of school. 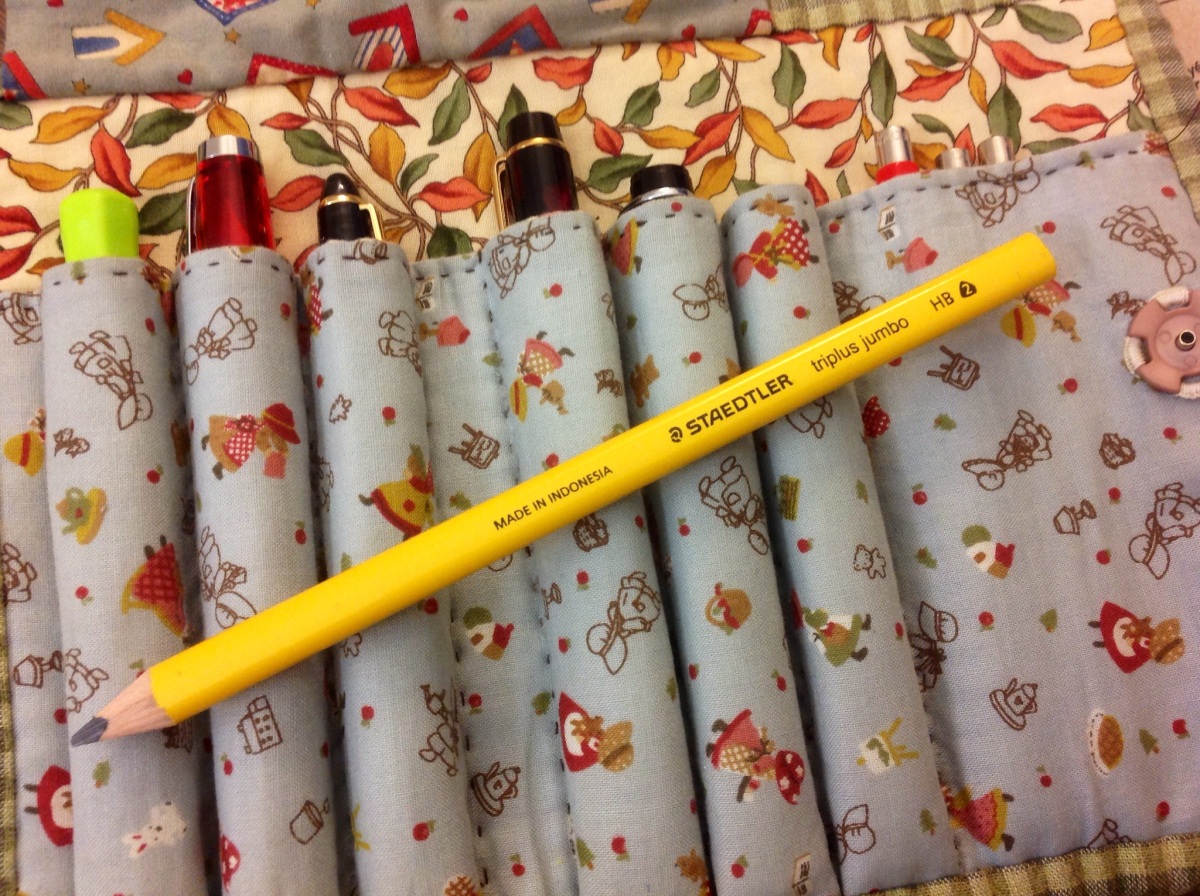 It’s only recently that I realized there was a particular reason I was so attracted to these chubby jumbo pencils. You see, they were never available to us when we were young, and they still aren’t for most children in Korea – Asian companies seem to have a different definition of “beginner’s pencils” compared to their counterparts in the West.

In Korea (and as far as I remember, in Japan as well) kiddie pencils are available in slightly darker grades (B or 2B, although HB is of course standard) and carry appealing shades of color or very commonly manga characters, but are rarely made in larger dimensions. In contrast, Western brands have long produced jumbo pencils for smaller hands and fingers (I’m not familiar with the history of school pencils, but given the existence of vintage pencils such as the Dixon Laddie, it doesn’t seem like a very recent phenomenon). 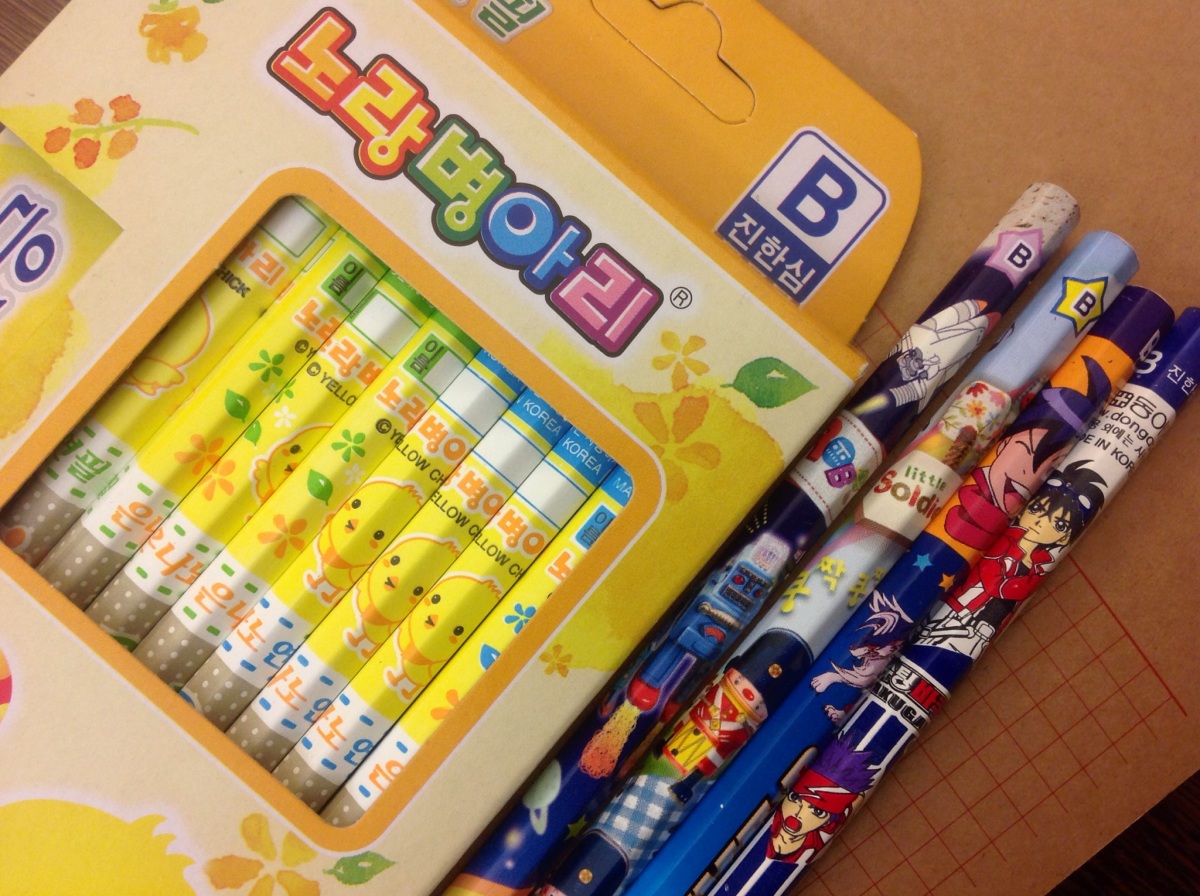 The reason behind this peculiar phenomenon, I suppose, is that children in Asia learn to use chopsticks long before they hold their first pencil, and so are expected to have already acquired a set of basic fine motor skills that will enable them to handle regular-sized hexagonal pencils without any difficulty. Therefore pencil companies do not feel any particular obligation to accomodate their smaller physique. Another point to consider is that the “correct” way to hold a pencil is much more strictly enforced in a culture that values the act of writing almost as a moral act: and therefore, what the Western triangular jumbo pencil is intended to do, i.e. gently nudge the child’s fingers into the correct position, Asian parents and teachers take it upon themselves to do in a much more aggressive manner, nagging and scolding. (They even try to correct left-handedness.) In this kind of situation, it may prove more efficient and time-saving to have children start on regular-sized pencils right away, rather than have them switch sizes halfway and start all over again. 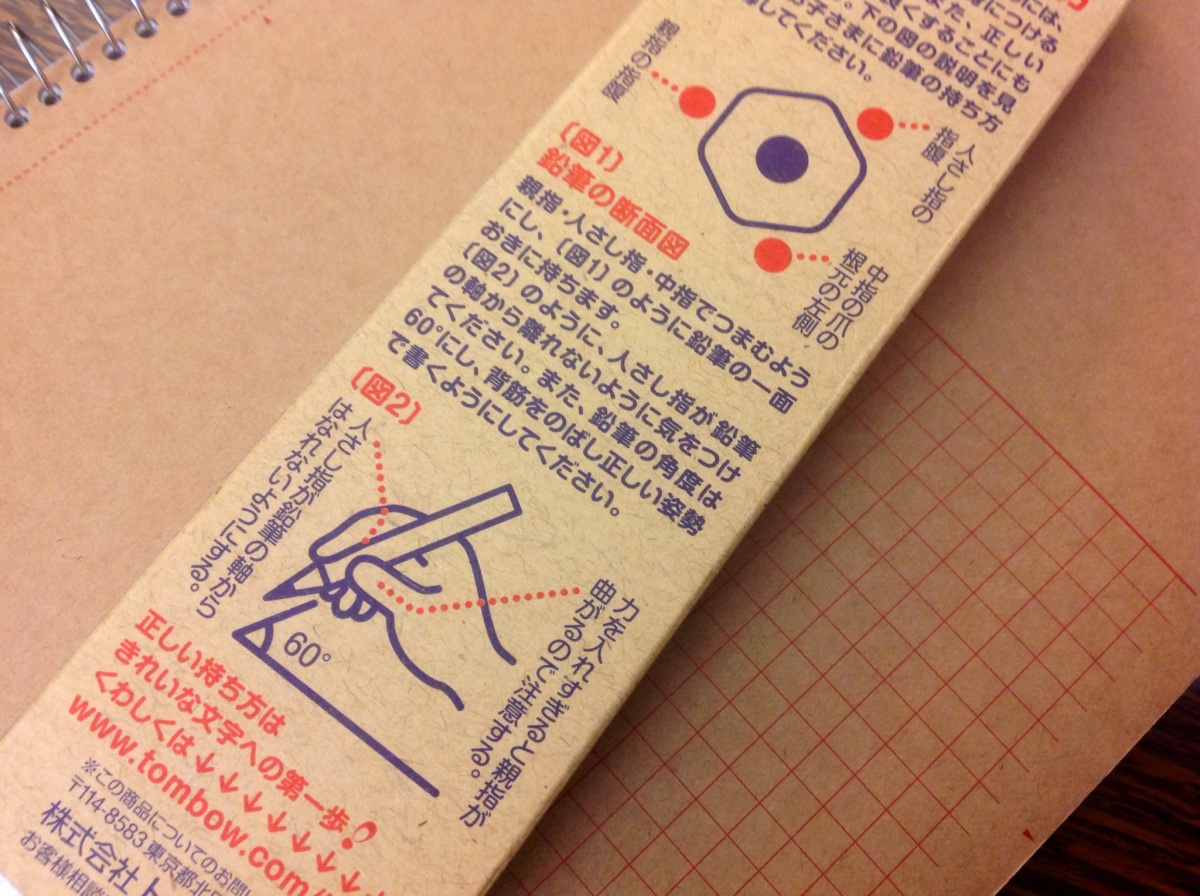 And God help you if your fingers aren’t in this standard position by first grade!

All this has an interesting effect on Asian consumers like me I think: the wide-grip jumbo pencil appeals on an aesthetic level, because its design is so unfamiliar. (For the same reason I also love the Stabilo Woody pencils, although I don’t have any use for them.) Interestingly, jumbo colored pencils are relatively common compared to their graphite cousins, but I’m not sure if that is because children use them earlier than regular pencils, or if it’s just because of the extensive retail network that companies like Faber-Castell and Staedtler have.

This year, the list said “24 HB pencils” but did not refer to any brand by name. (They usually tell us to get Staedtler erasers and pencil sharpeners.)  So I went ahead and changed my son’s pencil case color scheme to blue.

On a different note, I was recently talking to a Canadian woman whose children were grown. She mentioned that when she was young, schoolchildren were given ONE pencil each, and that they were expected to take good care of it. Now, she said, it’s like asking them to lose pencils, the way they ask for dozens to be brought to school.