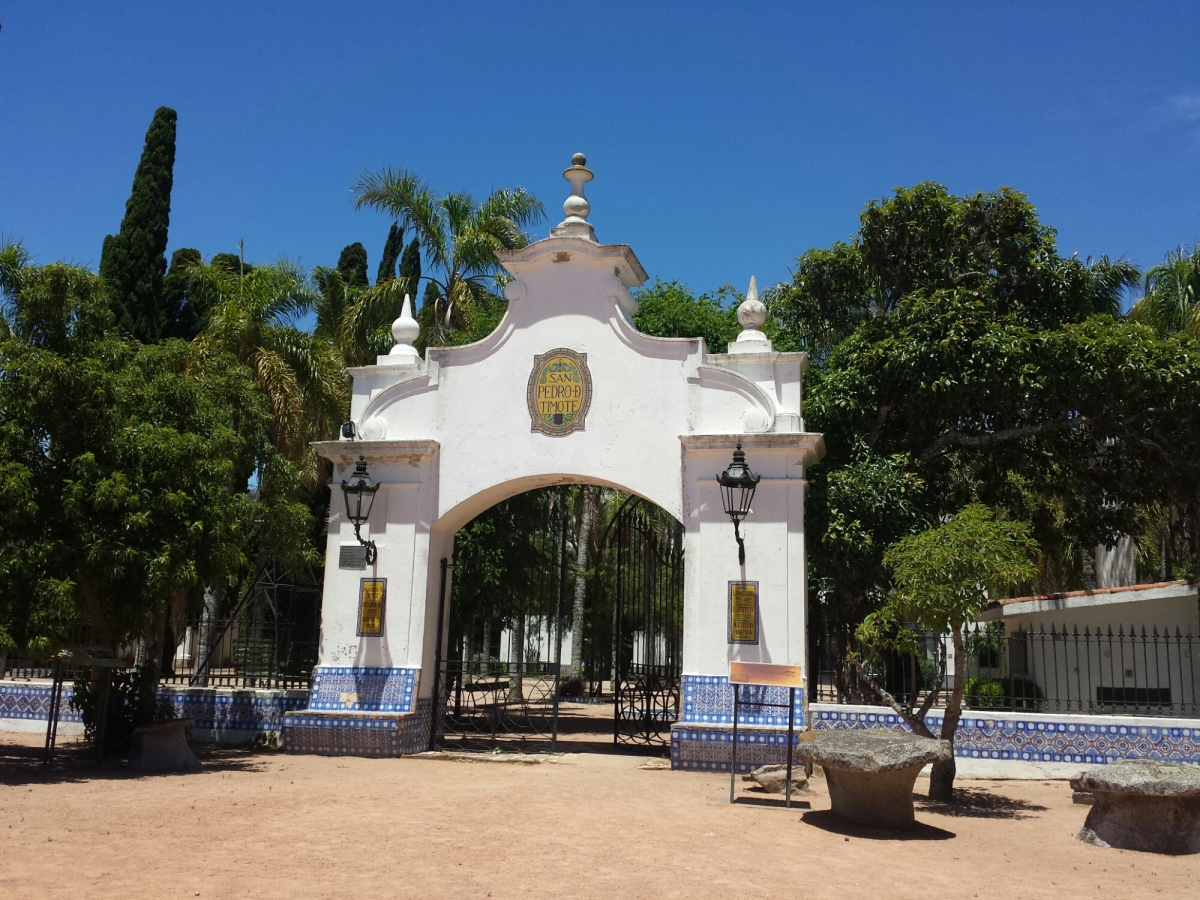 Recently we went on holiday to an estancia up north, near the town of Cerro Colorado, Florida. (The Uruguayan “Florida” is pronounced with the stress on the second syllable. The rest of this post is going to be about old books and Hereford cattle, so if you’re not interested, stop now.) The ranches around here, whether “working” (i.e. still a sheep, cattle & horse operation) or rehauled as a hotel catering to the tourist trade, generally offer a tranquil respite in a bucolic setting, with horseriding, sports facilities, four square meals a day and spotty Internet coverage. However, this particular estancia had an unusually illustrious history behind it. San Pedro de Timote started out under the Jesuits in the 18th century, and after being sold to an English immigrant in 1825, stayed in that family for more than 160 years through five generations. It was sold and converted into a hotel in 1997, but the estancia still has a family-owned feel to it, and many artifacts remain from its former life, including an impressive, dark-panelled library across from the main house. I spent many delightful hours there while my family was engaged in sunnier activities.

The collection reflects the fascinating lifestyle and pursuits of the landed gentry at the far end of the world. They were the descendants of English, German and Spanish immigrants who transplanted themselves across the ocean, but they still considered themselves Europeans, and sent their children abroad to study when the time came. There are books from throughout the 20th century in the major European languages: French medical books, old German photography magazines, TIME (a young Edward Kennedy!), international tennis and boxing journals. Someone took up gardening, and collected reference books in English. All in all they were surprisingly connected to the larger world, in a place where it is even now difficult to get any reading material in any language other than Spanish.

The bulk of the collection, and what made for some unexpectedly riveting reading, was made up of leather-bound volumes of periodicals relating to cattle husbandry and rural life. There were seventy years’ worth of the Herd Book of Hereford Cattle, as well as The American Hereford Journal, Farm & Country, The Pastoral Review, Meat & Wool, Hoofs & Horns, The Cattleman, Vie à la Campagne, El Campo, La Hacienda, El Chacra and various other almanacs. I spent most of the second day absorbed in the issues of The American Hereford Journal from 1939. While later issues (post-1940’s) mainly list upcoming cattle auctions in a brisk, businesslike manner, the earlier journals have more romance to them and feature historical overviews of the industry and bits of wisdom from veteran cattlemen that even a lay reader finds interesting. 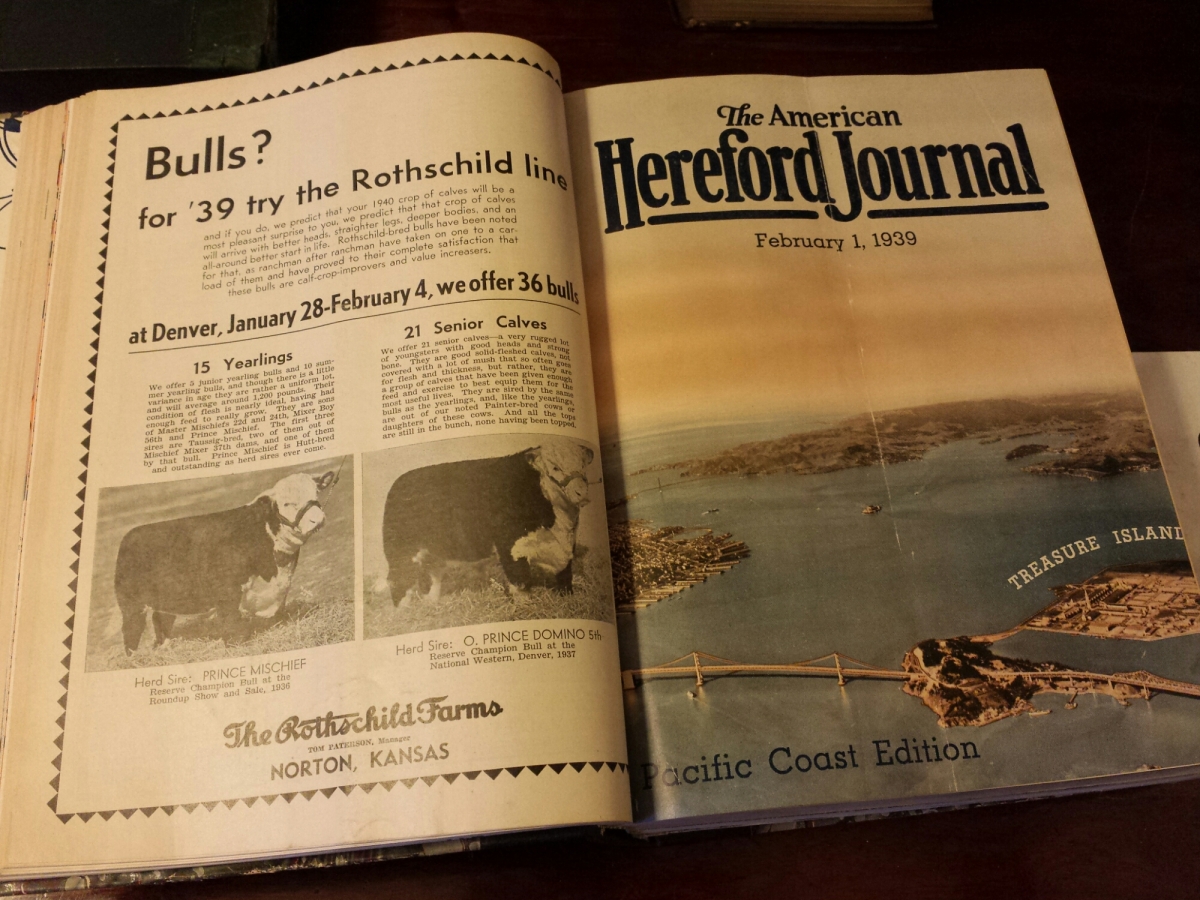 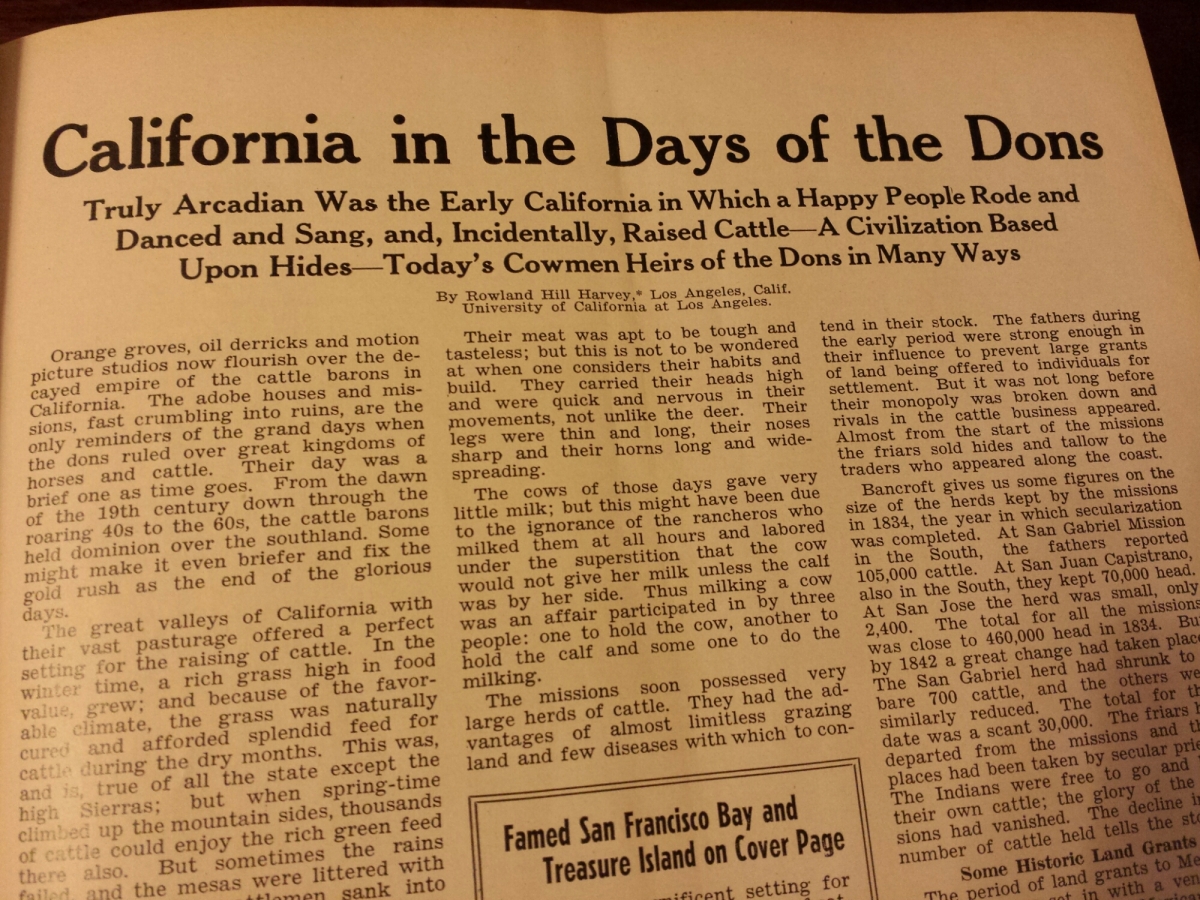 (The lighting wasn’t great inside the library. I apologize for the fuzzy pictures)

Have you seen a Hereford cow? I had not up until that point, and this happens to be a breed that looks very exotic to my eyes. Herefords look expensive and quite cuddly, with its head of plush cream-colored fur and a plump belly held up by short stumpy legs. I wanted to know why the owners of San Pedro were so crazy about them.

Western beef producers like Herefords. That fact is proved conclusively by the overwhelming predominance of cattle bearing the Whiteface trademark in western range areas. Herefords won their spurs early by going into a vast territory where beef was made the hard way – on short pastures and scant water supplies – and thrived on the hardships they found. So satisfactorily did they meet every requirement of the beef maker that their position as the “beef breed supreme” is to this very day unchallenged.

To me it has long been a wonder that Scotchmen didn’t adopt Herefords as their own breed, for Herefords are extremely economical converters of grass and forage into beef, and they can pick up a living where the picking is poor. The Scots, however, developed a breed in Scotland which shares with the Hereford a trait or an instinct of the highest practical value. That breed is the Ayrshire which can also maintain itself under hard climatic and feed conditions.

As breeds, Herefords and Ayrshires possess an almost miraculous power – a kind of unconquerable will – to live. Call it vitality, survival ability, hardiness, stamina, “rustling qualities,” resourcefulness, constitutional toughness, or what you will. The fact has been widely established and accepted that the Hereford breed is capable of “carrying on” and giving a creditable account of itself where living conditions are exceedingly hard and precarious.

And Herefords seem to inspire some pretty serious devotion. This from another fascinating article entitled “Why I Do What I Do With Herefords,” by Sam R. McKelvie, of Wood Lake, Neb.(I later found out that he had once served as governer of that state):

I have not built my herd. I am working at it and expect to be for the rest of my lifetime. The longer one works with purebred livestock, the more he realizes that the job is never finished. I hope the time never will come when we think that our herd is good enough.

It was in 1931 that we acquired By The Way Ranch in the heart of the Sandhills of Nebraska. That region is incomparable as a cattle country. The Sandhills are entirely different from the farming locality in which I was reared. Primarily and wholly, it is a cattle country. God intended the terrain there to be left green side up, and those who violated that rule saw their land wafted away on the wings of the wind. We produce no grain. This fact has a bearing upon the manner in which we must handle our breeding and range herds.

And indeed, after skimming thousands of pages on such issues as the relative merits of cottonseed meal vs. cold pressed cake and gazing into some soulful bovine eyes in three-fourths profile with names like Princess Domino and Belle Blanchard, I do think I’m falling for them, a little. And I never thought I could understand the appeal of a life on horseback, either, but then again, listen to this:

With the possible exception of the fur trade, no industry requires so few men for its successful operation over a large area as does ranching, and perhaps no other industry has employed so few men for the amount of capital invested. The lean, hard-bitten men who rode the great ranges of the West never numbered more than a few thousand though their great pastoral empire was larger than all of Western Europe.

(An interesting pictogram, from 1954)

I look forward to furthering my education on my next visit. Oh, I did look for pencil ads everywhere (the journals looked very promising at first), but it doesn’t seem like pencil manufacturers thought much of ranchers as a potential market. Maybe pencils and field notes were more for grain and produce farmers. I did see a typewriter ad but that was as far as I got regarding the stationery front. 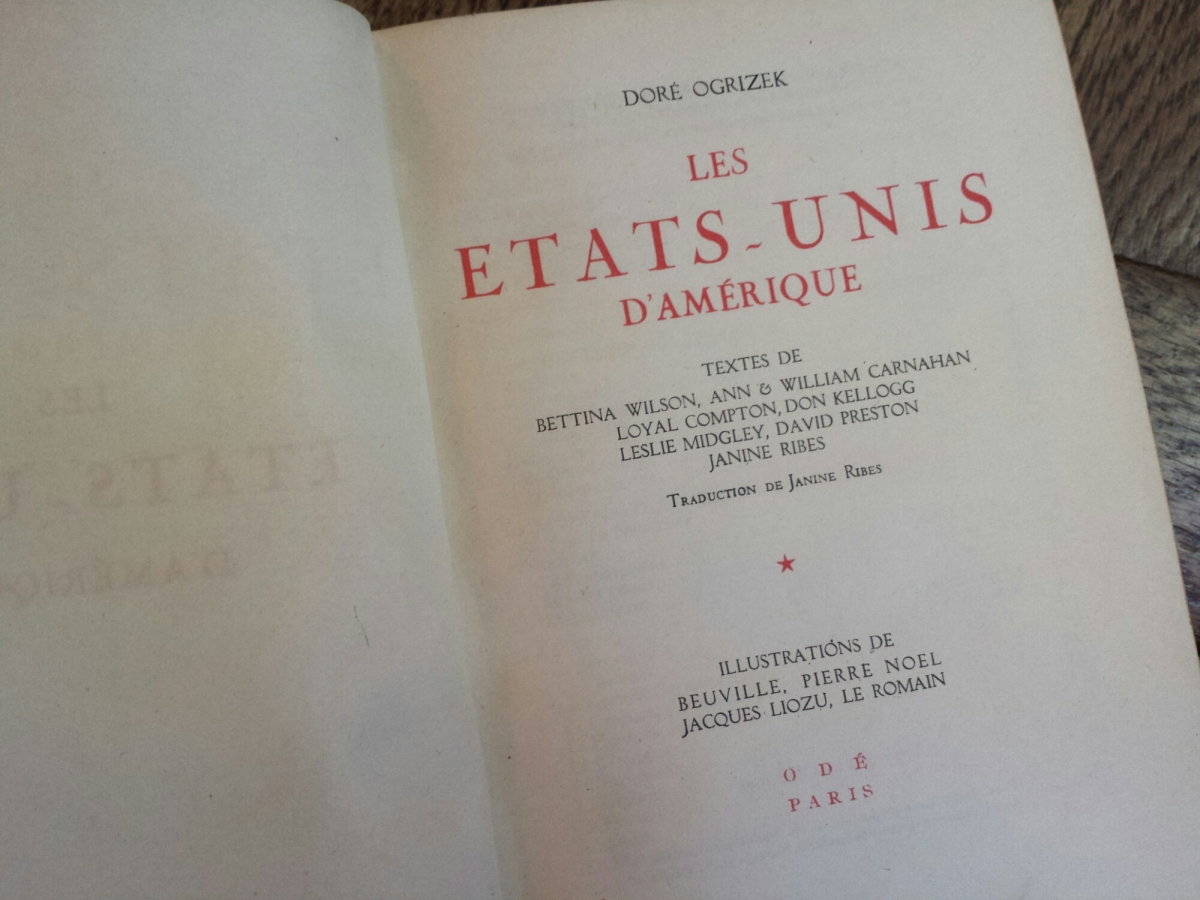 Another fascinating subset of books that I found in the library was a prewar selection of travel guides, mostly in French, to Italy, Germany and the like. This included a series of illustrated books (“Le Monde En Couleurs”) intended to serve as a general introduction to certain countries. Of particular interest was the installment on the U.S., Les Etats-Unis d’Amérique (1946), which gives the vast country a state-by-state overview. Nowadays in this multicultural, politically correct age, any such article would read like a dry, factual Wikipedia entry heavy on the statistics, but a few pages into this book and you realize that people had a different attitude towards truth back then. The authors dispense few figures but simply know Kentuckians are like this and Vermonters are like that, and the anecdotes can be quite amusing.

(A real Vermonter answers “yes” or “no” to the questions of a foreigner. He cannot stand vain curiosity, and never engages in useless talk. It’s not that he is being disagreeable, far from it, but simply that he is not in the habit of talking about subjects that he does not know perfectly and at firsthand. President Calvin Coolidge is a perfect example of this kind of taciturn peasant.)

I regret the fact that I am not of the generation acquainted with President Coolidge. And while Emerson is quoted as saying that “Boston’s destiny is to lead the civilization of North America,” I get the distinct impression that Boston’s crown has passed on to New York since then… but what do I know. The below is from the chapter on “Le Massachusetts”:

Even today, there is not one young man or young woman who does not aspire to a “tour” of Europe in order to complete his or her education, and the New England accent rings out high, chanting the pages of the Baedecker, in front of all the sites and monuments that esteemed little book suggests for the tourists to admire. Even soldiers hailing from New England distinguish themselves from the rest of the American army in Europe with their eagerness to see and know all.

Hmmm, interestingly enough the only people I ever noticed as having this notorious NE accent in and around Boston were the cops and the subway conductors, the student population having long since become mixed and internationalized.

And yes, America was king of production at that time. From the chapter “Le Pennsylvanie”:

Today, the ten million inhabitants living on its 45,000 square miles have helped Pennsylvania to take the lead in global production in numerous areas. The state, by itself, produces one-thirds of the nation’s coal, and half of all the steel that it consumes. Powerful Pittsburgh is the world’s biggest center of steel and glass. Hershey is the capital of chocolate, Lancaster the metropolis of linoleum. Allentown, Easton and Philipsburg take the lead in cement production. Three-quarters of all the slate used in the world come from the quarries of this state.

I had only ever heard of Wilkes-Barre, PA in connection with Eberhard Faber, but I was delighted to find it on the industrial map :)

5 thoughts on “Discovering America in a Uruguayan Estancia”